Greta and the Glass Kingdom (Mylena Chronicles #2)
by Chloe Jacobs
Release Date: 02/09/15
Entangled Teen
Summary from Goodreads:
Once upon a dark time… Greta the human bounty hunter never quite fit into the shadowed, icy world of Mylena. Yet she’s managed to defeat the demon Agramon and win the love of the darkly intense Goblin King, Isaac. Now Isaac wants her to rule by his side—a human queen. And the very announcement is enough to incite rebellion…

To make matters worse, defeating Agramon left Greta tainted with a dark magick. Its unclean power threatens to destroy her and everything she loves. With the Goblin King’s life and the very peace of Mylena at stake, Greta must find a cure and fast.

Her only hope lies with the strange, elusive faeries in the Glass Kingdom…if she can get there before the evil within her destroys everything.

1) So, the thing you probably can’t miss about Greta is that she really hates winter. But after all this time having to listen to her complain about it, I think I’ve got to cut her some slack.

You see, she finally admitted that she used to LOVE winter. Especially when the bright sun bounced off the fluffy white snow. She’d loved the snowball fights, and building snowmen on Saturday afternoons with her brother. She always wanted to go snowboarding, but never got the chance before ending up in Mylena. And somehow you’d think that a world of winter would be all about the skiing, snowboarding, and assorted cold-weather fun, but…not so much. The combination of constant, punishing weather, and being stuck in a world where everyone hated her eventually sucked the joy out of it for her.

2) Greta is a strong, kickass bounty hunter who can totally take care of herself, and yet she wasn’t always so sure of her own abilities (even now, there are moments…) Greta would kill me if she knew I was telling anyone this, but as a child she was painfully shy and insecure. She never got stellar grades in school, and always felt a little stupid. But in Mylena she started to think that maybe she had something better than smarts. Maybe she was destined for something other than math homework and biology labs.

3) Greta has a birthmark on the back of her leg just under her butt cheek that looks a little like a strawberry. Nobody has ever seen it, not even her. In fact, she has no idea it’s there and if someone should ever find it…she’s going to be SO embarrassed.

5) Greta’s favourite treat in the whole wide (human) world is…licorice. Yes, the big bad bounty hunter would trade her soul for a Twizzler. And when it comes to Mylena, she used to say there was absolutely nothing redeeming, nothing she liked about the icy, harsh place at all. But recently she’s found several things to like about this place that had once been so forbidding. At first, it was just the tea—made from a hardy linberry fruit. Sour and bold, it takes a little getting used to…a lot like someone she knows. And now there’s one more thing she likes about Mylena, too. 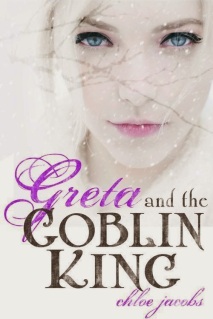 Greta and the Goblin King (Mylena Chronicles #1)
by Chloe Jacobs
Release Date: 12/11/12
Entangled Teen
Summary from Goodreads:
While trying to save her brother from a witch’s fire four years ago, Greta was thrown in herself, falling through a portal to Mylena, a dangerous world where humans are the enemy and every ogre, ghoul, and goblin has a dark side that comes out with the eclipse.

To survive, Greta has hidden her humanity and taken the job of bounty hunter—and she’s good at what she does. So good, she’s caught the attention of Mylena’s young goblin king, the darkly enticing Isaac, who invades her dreams and undermines her will to escape.

But Greta’s not the only one looking to get out of Mylena. An ancient evil knows she’s the key to opening the portal, and with the next eclipse mere days away, every bloodthirsty creature in the realm is after her—including Isaac. If Greta fails, she and the lost boys of Mylena will die. If she succeeds, no world will be safe from what follows her back…

(Only $0.99 for a limited time at select online retailers!)

About the Author
Chloe Jacobs is a native of nowhere and everywhere, having jumped around to practically every Province of Canada before finally settling in Ontario where she has now been living for a respectable number of years. Her husband and son are the two best people in the entire world, but they also make her wish she’d at least gotten a female cat. No such luck. And although the day job keeps her busy, she carves out as much time as possible to write. Bringing new characters to life and finding out what makes them tick and how badly she can make them suffer is one of her greatest pleasures, almost better than chocolate and fuzzy pink bunny slippers.
Author Links:

One comment on “5 Things You Don’t Know about Greta from Greta and the Glass Kingdom, by Chloe Jacobs”