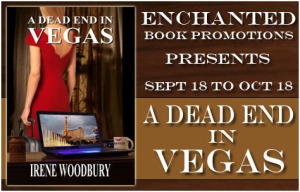 Title: A Dead End in Vegas

When the nude body of Dave Sloan’s wife, Tricia, is found dead at the Bellagio in Vegas, he’s stunned.  Why was she even there when she told him she was going to a conference in Phoenix?  Tricia Sloan’s mysterious death shatters, and later transforms, the lives of those closest to her.

Irene Woodbury’s second novel, A DEAD END IN VEGAS, is a dark, probing look at marriage, infidelity, revenge, and grief.  Immersing herself in drama and dysfunction for months on end was a challenge for this upbeat author, whose first book, the humor novel A SLOT MACHINE ATE MY MIDLIFE CRISIS, was published by SynergEbooks in 2011.  At first glance, the two novels seem quite different, but both deal with midlife confusion and chaos, and the complexities and unpredictable nature of the human heart.  And both, of course, are partially set in Las Vegas, a city Irene got to know well during her years as a travel writer.  Between 2000 and 2005, her stories appeared in major newspapers in the U.S., Canada, and Europe. Irene, who graduated from the University of Houston in 1993, lives in Denver with her husband, Richard, a retired correspondent for Time Magazine who edited both of her novels.  The couple miss traveling, but, after two novels, Irene insists there’s no greater journey than the one into your own heart and mind.

A Dead End in Vegas: http://www.amazon.com/Dead-End-Vegas-Irene-Woodbury-ebook/dp/B00NCKEFSI/

Dave interrupted Pam. “Excuse me,” he said sharply. “Your husband claimed the suggestive e-mails were written by a hacker? Who on earth could that be?”

“How should I know?” she snapped. “Maybe some disgruntled student who didn’t like the grade they got on a term paper, or a tech major trying to make a name for himself. This is a college campus. There are always precocious students who are bored with regular class-work and amuse themselves by hacking into professors’ e-mail accounts to make trouble. They have some laughs over a few beers and move on to the next victim. It’s everyday life on a college campus.”

“So you’re telling me that my wife was an Internet stalker, and the e-mails and photos came from some student hacker?”

“Yes, that’s right,” she confirmed with a nod. “My husband was the victim, not the perpetrator.”

“Excuse me, Mrs. Daggett, but I can’t sit here and listen to this garbage one more minute. Your husband is a liar!” Dave charged, rising from his chair and grabbing his briefcase. He opened it with a flourish and dumped the contents on her desk.