Zombies… When Abigail Collins heard Nick’s theory on their current case, she knew he had to be crazy, but when a zombie shows up in her apartment she has no choice but to believe him. A renegade necromancer bent on manipulating witches and murdering innocent people runs amok in town and Abby and Nick have to stop them before more bodies pile up. Further complicating matters two PIB agents step onto the scene, claiming a link between their case and Abby’s. To top it all off, blood starved vampires are causing chaos in the city. It’s just another day for PIB Agent Abigail Collins, full of blood, monsters, and explosions. 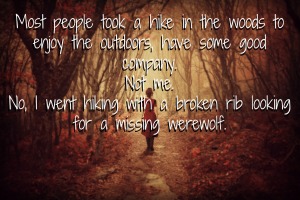 “Abby?”
I heard Nick’s voice. I turned to find him standing behind me, also drenched from the rain. “Yeah, what are you doing here? I thought you lived on the other end of town?”
“I was out and realized I needed to grab something before heading home.” He shrugged. “What about you?”
I took the hood of my jacket off. “Apparently I’m taking care of a lost cat until I can find the owner.”
His eyes widened. “A cat?”
“Yes, a Sphinx. You know, a naked one.”
His eyes got bigger and I laughed. “He was outside in the rain, I wasn’t going to leave him there.”
“Maybe he’s your familiar.” He said, “But just be cautious.”
I raised a brow. “He’s safe and means no harm.”
“How do you know that?”
“Because I made sure to put up a protection spell on my house last year after the Cult waltzed right in, oh and after Michelle waltzed in too. I decided it was the best type of defense.”
He pressed his lips together and gave me a disapproving gaze. “You never told me the Cult paid you a personal visit.”
Aw crap, I’d screwed up. “It doesn’t matter. It wasn’t any of your business anyways. The point is that they backed off.”
“You’re just a magnet for trouble, Abigail.”
We walked further into the store and I had no idea why he was staying next to me, but I let it go. “Don’t I know it?” I laughed. “You’ve gotten the mild end of it. Just wait, if Boss Man makes you shadow me much longer you could start to see the really weird shit.”
“For our sake, I hope we only have to partner until the end of this case. Because it’s only a matter of time until your bad luck starts to rub off on me.”
A shriek came through the nearly empty store. Nick and I both cursed and headed towards the sound. People were running the other direction, one screamed ‘vampire’ as they passed us.
Well, crap. Nick and I drew our guns and continued to where the people were running from. Sure enough, a vampire stood there with his lips sealed to the woman’s neck. His red gaze flickered to me.
“He’s blood starved.” I told Nick and we both moved closer. We took aim. “Let the woman go.” I didn’t have to technically warn the vampire, but I wanted to give him a chance. Reasoning with a blood starved vampire was kind of like reasoning with a toddler, they may not realize what they are doing is wrong and need to be told to stop.
He ignored me and went back to the woman. His blond hair fell in front of his eyes and he started to turn. I didn’t hesitate. I shot his leg. I couldn’t shoot him in the head without risking the woman, so the leg was going to have to do.
He snarled and threw the lady away. Nick went to her without me having to prompt him. The vampire turned his gaze to me and rushed me. The problem with vampires was that they moved fast. Inhumanly so. I took two more shots in hopes of slowing him down, but I ended up pinned to the floor.
He bared his fangs at me. I didn’t have any desire to be a meal. I brought my hand up and slammed the butt of my gun into his temple. He reared back and I scurried away and shot the moment I could. Blood and vampire brains exploded all over the floor and me. The body fell and I wiped the blood off my face and stood. “What the fuck.”
“Don’t put your gun away Abby.” Nick called. “Two more!”
Seriously, two more? What the hell was going on tonight? Buy two get one free on blood-starved vampires? 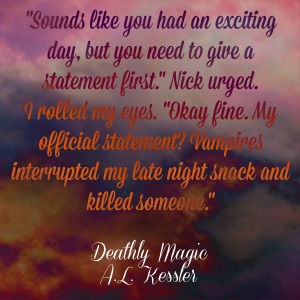 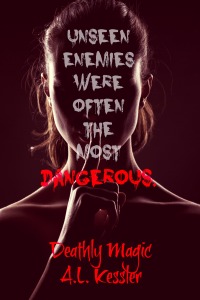 A.L. Kessler is the author of Dark War Chronicles and Here Witchy Witchy Series. She dabbles in paranormal romance, steampunk and urban fantasy. Since she was a teenager she’s loved weaving stories and spinning tales. When she’s not at the beck-and-call of the Lord and Lady of the House, three black cats by the names of Jynx, Jiji and Sophie, training a playful puppy named Zelda, playing with her daughter, or killing creepers and mining all the things with her husband, she’s either reading, participating in NaNoWriMo, or writing in her Blog Writing Rambles. For those who like things on the more spicy side, she leads a double life as Alexandra Webb.