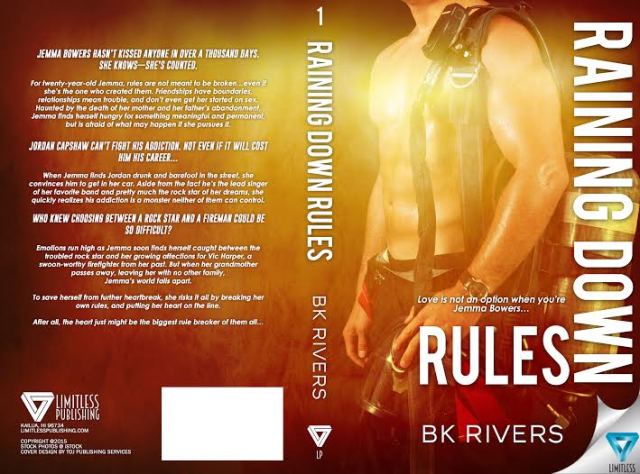 Raining Down Rules
by B.K. Rivers
Release Date: February 9th 2016
Genre: NA Contemporary Romance
Limitless Publishing
Summary:
Jemma Bowers hasn’t kissed anyone in over a thousand days. She knows—she’s counted.
For twenty-year-old Jemma, rules are not meant to be broken…even if she’s the one who created them. Friendships have boundaries, relationships mean trouble, and don’t even get her started on sex. Haunted by the death of her mother and her father’s abandonment, Jemma finds herself hungry for something meaningful and permanent, but is afraid of what may happen if she pursues it.
Jordan Capshaw can’t fight his addiction. Not even if it will cost him his career…
When Jemma finds Jordan drunk and barefoot in the street, she convinces him to get in her car. Aside from the fact he’s the lead singer of her favorite band and pretty much the rock star of her dreams, she quickly realizes his addiction is a monster neither of them can control.
Who knew choosing between a rock star and a fireman could be so difficult?
Emotions run high as Jemma soon finds herself caught between the troubled rock star and her growing affections for Vic Harper, a swoon-worthy firefighter from her past. But when her grandmother passes away, leaving her with no other family, Jemma’s world falls apart.
To save herself from further heartbreak, she risks it all by breaking her own rules, and putting her heart on the line.
After all, the heart just might be the biggest rule breaker of them all.

BK Rivers grew up riding through rolling fields of grain on horseback, driving hay trucks and catching frogs in a silver creek.  She traded country life for the big city when she married the love of her life, but the heart always returns to the country.BK, her husband and three children live in the Phoenix suburbs on their own mini farm surrounded by crowing roosters and the low nicker of horses.  When she’s not writing, she can be found baking anything sweet, in fact it’s been said her brownies are so good they save marriages.The inspiration for her novels comes in many forms, but mostly from her Gotye channel on Pandora.  She writes young adult and new adult novels to the beat of Gotye, Snow Patrol and many others.