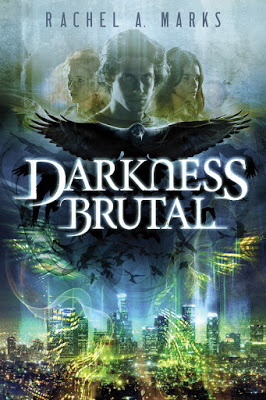 Aidan O’Linn’s childhood ended the night he saw a demon kill his mother and mark his sister, Ava, with Darkness. Since then, every three years the demons have returned to try to claim her. Living in the gritty, forgotten corners of Los Angeles, Aidan has managed to protect his sister, but he knows that even his powers to fight demons and speak dead languages won’t keep her safe for much longer.
In desperation, Aidan seeks out the help of Sid, the enigmatic leader of a group of teens who run LA Paranormal, an Internet reality show that fights demons and ghosts. In their company, Aidan believes he’s finally found a haven for Ava. But when he meets Kara, a broken girl who can spin a hypnotic web of passionate energy, he awakens powers he didn’t know he had―and unleashes a new era of war between the forces of Light and the forces of Darkness.
With the fate of humanity in his hands, can Aidan keep the Darkness at bay and accept his brilliant, terrifying destiny?

Darkness Fair (The Dark Cycle #2)
by Rachel A. Marks
Release Date: February 2nd 2016
Summary from Goodreads:
Against the backdrop of an ancient battle between the forces of Light and the forces of Darkness, Aidan struggles to control the newly awakened powers that seem to be his only hope for rescuing his little sister Ava, who is now trapped somewhere beyond the Veil. As he gravitates to Kara, the beguiling and dangerously unstable girl who helped him realize his abilities, a terrible mistake of fate is revealed that points him back toward Rebecca, whose role is becoming more critical to the battle. And no matter what his heart wants, it might be too late to stop the pieces already in motion.
Without knowing the sacrifices that will be required of them, Aidan and his motley crew of friends—each with their own role to play—must face the demon threat head-on. They’re the only ones keeping the growing army of Darkness at bay, and if they fail, the future of humanity could be lost.

About the Author
Rachel A. Marks is an award-winning author and professional artist, a cancer survivor, a surfer and dirt-bike rider, chocolate lover and keeper of faerie secrets. She was voted: Most Likely to Survive the Zombie Apocalypse, but hopes she’ll never have to test the theory. Her debut novel is DARKNESS BRUTAL, the 1st installment in The Dark Cycle. Book 2 releases February 2nd, 2016 and is titled, DARKNESS FAIR.
Author Links: