Out January 4th is ALL IN (Leaving Las Vegas #2) by Aleah Barley…..

Daisy always plays the numbers and only has one night stands. Ryan’s an expert at reading people who falls in love too easily. When these two undercover poker players meet in Las Vegas the stakes go up and they’ll have to risk everything on love…

World-class statistician and poker prodigy Daisy Drake has two rules: never risk anything you can’t afford to lose, and never, ever, trust a gambler. Which is why she gave up the game and moved to Los Angeles, where she became a tenured professor. But when an old acquaintance calls needing Daisy’s…expertise…to help catch a cheater, she heads back to Las Vegas and the poker tables.

FBI Agent Ryan DiNatto’s been a gambler since he was four, and a hustler since he hit puberty. Coming off an undercover mission that ended with him shot and his partner in a wheelchair, Ryan’s out for blood. With a mob accountant and a hit man on the loose, the stakes have never been higher, and this time, he’s determined to make things right—even if it means beating spunky, sexy, Daisy Adams at her own game
On Sale in Digital: January 4, 2016

Add ALL IN to Your TBR Pile on Goodreads!

The door wrenched open before Daisy could knock again.

“Who the hell are you?” someone snarled, but all Daisy could see were the man’s muscles.

Oh, God, she was salivating. Was that a six-pack? A ten-pack? The man definitely had washboard abs. She should have been a physiology major. Her gaze skimmed across bare abs and broad shoulders that blocked her view of the room behind him.

Not that she had much interest in anything beyond the living, breathing, Renaissance sculpture standing in front of her. Even the scar on the man’s left deltoid just added interest instead of marring his otherwise perfect appearance.

This guy. Her dream came back to her in a blur. This was the one who could push her back against the nearest wall, tell her what to do, and leave her begging for more.

Unfortunately, he was taken and pissed.

Daisy flushed as she took in his broad—clenched—jaw and sharp green eyes. His golden cheeks were flushed with anger, his lush lips pulled back in a frozen snarl.

A firm handshake was the key to making a good first impression. Bullet had taught her that.

Daisy stuck out her hand.

The guy didn’t move. He was too busy staring at her raven curls and—yep, Daisy flushed in realization—counting sheep pajamas. They might not be sexy, but they were her favorites. It wasn’t like everyone could roll out the door movie-star perfect in faded blue jeans slung across muscular hips.

A trail of golden hair ran down his chest before disappearing under a button fly.

Damn. She loved a button fly.

“Uh huh.” Two syllables. Not even a real word.

He raised his hand to show a heavy metal watch. The timepiece was utilitarian and built to withstand a lot of abuse. The dark metal clasped over golden skin and…was that a freckle on his wrist? When did freckles get so sexy?

His lips twitched slightly, the ends turning up in a wry smile. “It’s not late. It’s early. It’s five o’clock in the morning.”

“The morning,” Daisy replied, deadpan. Forget getting back to sleep. It was less than an hour and a half before her multiple alarm clocks were set to go off. She might as well hop in the shower, throw on some clothes, and start praying to the closest benevolent god that she wasn’t about to make a fool of herself.

Or—worse—get Bullet killed. He hadn’t been too specific about the casino’s problems, but cheating in Las Vegas—with its security guards and surveillance equipment—was a fool’s game. It wouldn’t be the first time for con men to turn violent when cornered.

“Are you sure your watch is right?”

CELEBRATE THE RELEASE WITH A GIVEAWAY!

2 Runner-up Prizes: Each Get 1 Digital Copy of LEAVING LAS VEGAS

Check Out the First Book in the Leaving Las Vegas Series! 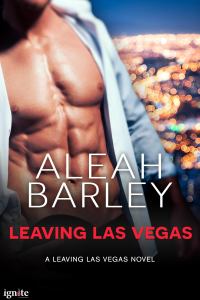 When West Virginia wild child, Glory Allen enters a private poker game with her town’s dreams at stake she loses it all. To make matters worse, she’s trapped in a car with the sexy but infuriating man who won—and accused her of cheating. Now because of him, she’s on the run from the mafia who put out a hit on the stuck-up casino magnate with the toe-curling good looks—and he isn’t even her type. So why can’t she cool the explosive chemistry between them?

She’s out of control…and she’s enough to drive Luke Tanner crazy. Yet she’s the only one willing to put her neck on the line…for him—a complete stranger she professes to hate. Now he’s in debt…to her. And it’s a debt he’s willing to work off any way she wants…on the hood of his sports car, in a waterfall—wherever she’ll have him, he’s willing to pay the price.

But the stakes are raised when they return to West Virginia—helping Luke escape has put Glory and her hometown in the sites of someone who wants him dead. This time Glory decides she’s not going to end up empty-handed—it’s time for the winner to take all and she won’t stop ’til she wins his heart.

Aleah Barley is a writer of explosive romance for everyone. She lives and writes in Detroit, Michigan, with a cat who’s recently learned how to levitate, an over enthusiastic Labrador, and the cutest guy in the world. She will do anything for a hot cup of coffee or a wild romance–and, she can spell onomatoepia without using spell check.

You can also visit her online at the following places: