Welcome to the weekly blog hop featuring paranormal stories. From witches to werewolves, vampires to berserkers, you name it, we have it. This blog hop is open to authors and writers whose work is published or unpublished. We also welcome works-in-progresses/WIP’s! Join us each week and check out all the cool stories!

This week, I’m featuring a character profile of the vampire Deirdre from my novel Legally Undead. So check out the profile and excerpt below, then be sure to HOP back to check out the rest of this week’s entries!

Age: Uncertain, though she claims to be older than Christianity

Physical description from the book: Her long, white-blonde hair curled over her shoulders and halfway down her arms. Her backless dress skimmed her body, and a short train gathered at the small of her back swept the floor in a long fall of shimmering red fabric. Her skin was white and smooth, almost the same color as her hair. From the front, the illusion of perfection crumbled. She was certainly beautiful, without a doubt—her large dark eyes almost seemed to glow with energy and her mouth, outlined in a red lipstick that matched her dress perfectly, was full and sensuous. But her beautiful face was cold and hard. She looked almost plastic.

Quote that fits her personality: “My understanding is that the current collective noun for vampires is ‘kiss,’ as in ‘a kiss of vampires.’ Of course, it used to be ‘slither,’ like a slither of snakes. I rather preferred that term myself. But one must learn to change with the times.”

Best quality: She seems genuinely interested in protecting the vampires in her territory.

The worst thing about vampires is that they’re dead. That whole wanting to suck your blood business runs a close second, but for sheer creepiness, it’s the dead bit that gets me every time. They’re up and walking around and talking and sucking blood, but they’re dead. And then there’s the whole terminology problem–how can you kill something that’s already dead? It’s just wrong.

I was twenty-four the first time I . . . destroyed? dispatched? . . . a vampire. That’s when I found out that all the books and movies are wrong. When you stick a wooden stake into their hearts, vampires don’t disintegrate into dust. They don’t explode. They don’t spew blood everywhere. They just look surprised, groan, and collapse into a pile of corpse. But at least they lie still then, like corpses are supposed to.

Since that first kill (I might as well use the word–there really isn’t a better one), I’ve discovered that only if you’re lucky do vampires look surprised before they groan and fall down. If you’re unlucky and miss the heart, they look angry. And then they fight.

There are the other usual ways to kill vampires, of course, but these other ways can get a bit complicated. Vampires are notoriously difficult to trick into sunlight. They have an uncanny ability to sense when there’s any sunlight within miles of them, and they’re awfully good at hiding from it. Holy water doesn’t kill them; it just distracts them for a while, and then they get that angry look again. And it takes a pretty big blade to cut off someone’s head–even an already dead someone–and carrying a great big knife around New York City, even the Bronx, is a sure way to get arrested. Nope, pointy sticks are the best way to go, all the way around.

My own pointy stick is actually more of a little knife with wood inlay on the blade–the metal makes it slide in easier. I had the knife specially made by an old Italian guy in just about the only ratty part of Westchester, north of the city. I tried to order one off the internet, but it turns out that while it’s easy to find wood-inlay handles, the blades themselves tend to be metal. Fat lot those people know.

But I wasn’t thinking any of this when I pulled the knife out of the body on the ground. I was thinking something more along the lines of “Oh, bloody hell. Not again.” 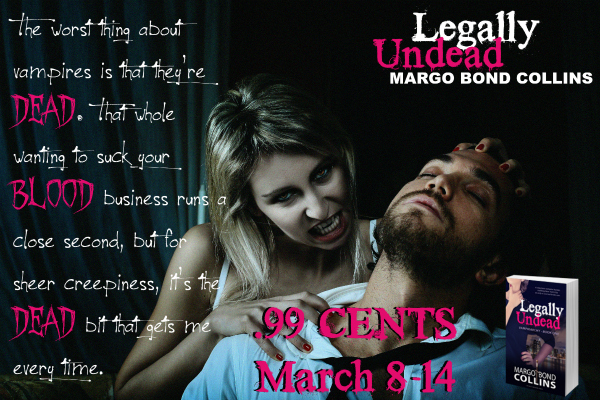 Margo Bond Collins is the author of a number of novels, including Sanguinary, Waking Up Dead, Taming the Country Star, Bound by Blood, Legally Undead, and Fairy, Texas. She lives in Texas with her husband, their daughter, and several spoiled pets. She teaches college-level English courses online, though writing fiction is her first love. She enjoys reading urban fantasy and paranormal fiction of any genre and spends most of her free time daydreaming about vampires, ghosts, zombies, werewolves, and other monsters.