Welcome to Something Wicked Rises!

Today, I’m featuring a guest post by Blaire Edens, author of The Witch of Roan Mountain. Check out her post below, then be sure to enter to win an ebook copy of her book, leave a comment and let us know: what’s your favorite ghost story? Then HOP to check out the rest of the posts!

The Magic of Roan Mountain

Roan Mountain, located on the border between North Carolina and Tennessee, is a magical place. Throughout history, beginning with the Native Americans, there have been a series of spooky stories associated with it. The mountain is covered in a dense stand of Spruce and Fir trees and it includes the world’s largest natural Rhododendron garden, it’s nearly 6,000 feet above sea level. 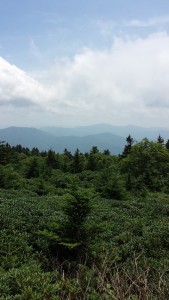 The trees are covered in moss and much of the time it’s covered in a foggy mist, making it look like something out of a fantasy novel. 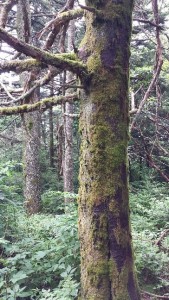 While there are plenty of existing spooky stories to draw from in the Appalachian Mountains, when I wrote The Witch of Roan Mountain, I decided to create my own legend by using historical elements that effected the region in the last hundred and fifty years.

Witches fascinate me. They always have. From the first time I read the classic Witch of Blackbird Pond, I was hooked on the idea that most “witches” were women who were simply misunderstood or scapegoats. In the case of my witch, Delphine, she’s a little bit of both.

A woman who’s trapped in an abusive marriage, unable to marry the love of her life, Delphine is the perfect scapegoat for the small mountain community she lives in, and because of a disability, she’s used to the scorn of her neighbors.  What she doesn’t expect is being accused of a crime she didn’t commit.

When I went to Roan Mountain on a research trip in the summer of 2015, it was much more complex, more interesting than I remembered. I realized how lonely it could be, how remote. How the extreme weather and isolation could be crushing, even to a woman who was quite used to being an outcast.

The rare beauty of a place like Roan Mountain comes with a price and I loved exploring the idea of what that price may be, both for my witch and her contemporary counterpart, a disillusioned lawyer who it trying to regroup after losing her job.

I hope you enjoy The Witch of Roan Mountain. It helped me connect to the land of my ancestors in a way I’d never been able to access before and in many ways, the story freed me, too. 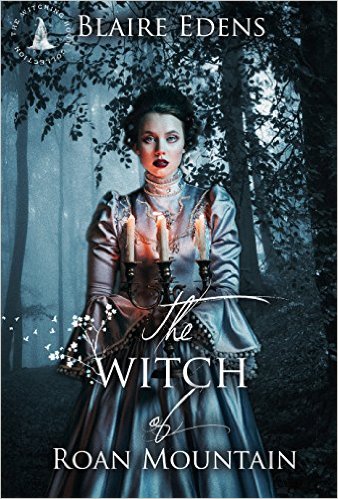 Maeve McMahan, a criminal defense attorney, has just blown the case of her career. When she returns home to the mountains of North Carolina to clear her head, she moves back in with her grandmother. On an easy hike, she meets the one woman she never expected to see: Delphine, The Witch of Roan Mountain.

Accused of a terrible crime she didn’t commit, Delphine has been haunting the county since just after the Civil War and she can’t rest until her name is cleared. She’s counting on Maeve’s help to get to the bottom of the century-old mystery.

Campbell Hyatt, a sheriff’s deputy, has never gotten over his first love, Maeve. When her grandmother breaks her leg, Campbell’s on duty and he finds Maeve at the top of Roan Mountain, convinced she’s seen a ghost. A cop who doesn’t believe in ghosts, he thinks Maeve needs to be focused on her grandmother not an old legend that hits a little too close to home for his liking.

With Maeve’s car out of commission and Granny stuck in the hospital, Campbell and Maeve are thrown together in a quest to find out why Delphine was branded a witch. It will take both of them to get to the bottom of a nineteenth century story love story that may impact them more than they realize. Can they banish a ghost without rekindling an old flame of their own?

Maeve decided to start with an easy hike. It had been years since she’d roamed these mountains and the gym work-outs she’d done in Atlanta didn’t even come close to getting her into the shape she was in when she lived here. The Roan Mountain Gardens trail was just what she needed. Easy and quickly rewarding. She tossed her things in the passenger seat of the Volvo and drove down Jane’s Bald Road.

She turned at Carver’s Gap and followed the winding road up toward the gardens. After stopping at the kiosk, paying the usage fee and putting the hang tag on her rear-view mirror, she steered her Volvo sedan into a parking spot. The parking lot was empty. Too early for the fall foliage peak and too late for the summer riot of Rhodendrons, Maeve had the place to herself. She grabbed her water bottle and a small daypack from the trunk and headed toward the paved trail that led to one of the best views anywhere.

Because it was still early, most of the boreal forest leading to the overlook patio was still shrouded in mist. Maeve took her time winding through the moss-covered trees, savoring the rich earthy smell of the soils and the beautiful, vibrant greens of the plants. As she walked, the fog began to lift and disperse, allowing the sun’s light to penetrate through the trees in watery stripes.

She had no idea why she’d stayed away so long.

It was eerie being alone up here. Even though she’d been on this path dozens of times, this was the first time she’d been by herself.

In high school, it had been one of her favorite places. She and Campbell used to come up here and picnic. Kiss. Make love. She smiled at the memory.

He was still in town. A sheriff’s deputy. Single, no kids. Granny kept up with him and Maeve suspected that the old woman still fostered dreams that Maeve would come to her senses and marry Campbell.

It was too late for that. By a decade.

Campbell would always be a small-town boy. He’d never leave Avery County. The place, with its towering green mountains and ice-cold streams, was as much as part of him as the blood running through his veins.

Maeve got out of the county as soon as she had a chance. Undergraduate degree at Clemson University and then law school at Wake Forest. As soon as she’d graduated, she was off to Atlanta to work for one of the best criminal law firms in the South.

She’d planned to stay with Palmer, Norris, Howard for the rest of her career.

Until she’d let her ethics get in the way.

She had blown a big case. A case she could’ve won, should’ve won. But she just couldn’t compromise her principles.

Now she was back where she started. Avery County, North Carolina. No job, no plan. No direction. But she wouldn’t be here for long. It was too small, too confining.

Maeve took a deep breath and tried, for the thousandth time, to relax. Chill. To not think about the Juris Doctor she’d worked so hard to get only to piss away less than ten years later.

She rounded the corner and the view cleared her mind instantly.

Spreading out in front of her were the green folds of mountains and the crisp tucks of valleys for as far as she could see. Some of the trees, especially the ones high on the ridges, were beginning to turn yellow. Fall was on its way and would light these mountains aflame with color.

She sat down on a bench and pulled her water bottle and a granola bar from her daypack.

Maeve heard the woman before she saw her. A childhood spent in the woods had given her sharp ears. There was no mistaking the soft footsteps on the fallen leaves coming toward the bench as those of a woman.

When she looked up, she was shocked.

Staring back at her was the one woman she ever expected to see.

I’d known that she was coming. I’d felt it in the wind, the trees, the change of the seasons. We were tied together, she and I, and she was the only one who might be able to help me. I’d prayed for her to hurry.

Even dead women pray. Probably more than the living ones.

The woman on the bench was small, tiny. Fragile. More like a teenager than a woman. Long blond hair pulled back off her oval-shaped face. The most remarkable thing about her was the way her blue eyes were as sharp as icicles.

It worried me. I’d waited a long time for her to come home and now, looking at her from behind the trunk of a balsam tree, I wasn’t sure she was going to be able to help me.

She wasn’t like her granny. Where her granny was mostly gristle and vinegar, this girl was cotton and clouds. I was terrified that I’d wasted all my energy to get up here just to find I’d been wrong.

I wasn’t sure she’d even be able to see me. Not at first. It might take her awhile to believe I was real. Well, mostly real.

I eased out so that I was standing on the pathway. She turned immediately. I put all my energy into making myself visible. It felt strange. I’d spent so many years hiding and now I was trying to do the opposite. I bit my lip and concentrated as hard as I could.

Her eyebrows went up.

Maybe I was right in waiting for her. She had the gift.

“I’m Delphine,” I said. It took all the energy I had to mutter two words. Back when I’d been alive, I could talk all day without flagging an inch but now it was exhausting.

The woman nodded. “I know who you are.”

And then I faded into nothing.

Blaire Edens lives in the mountains of North Carolina on a farm that’s been in her family since 1790. When she’s not plotting, she’s busy knitting, running, or listening to the Blues. Blaire loves iced tea with mint, hand-stitched quilts, and yarn stores. She refuses to eat anything that mixes chocolate and peanut butter or apple and cinnamon. She’s generally nice to her mother, tries to remember not to smack her bubble gum, and only speeds when no one’s looking. Blaire is the award-winning author of Wild About Rachel, An Officer and a Mermaid, and The Witch of Roan Mountain.