Welcome to the Halloween Party Blog Hop, hosted by Kim Kasch! In this hop, authors are gearing up for the paranormal season with pictures, stories, costume ideas, and more.

Today, I’m sharing my favorite Halloween-themed meme, a list of my favorite vampire movies, and a snippet from my novel Sanguinary. So check it all out, then HOP over to Kim’s site for the rest of the Halloween Hop happenings!  Before you go, though, leave me comment and share your favorite meme or vampire movie!

As a general rule, I like my filmic vampires to be brutal and bloodthirsty—as much as I enjoy the recent trend toward sexy vampires (because YUM), I think there’s a reason that we, as a culture, keep coming back to the kinds of vampires who are absolute monsters. Both kinds of vampires—those we want to devour and those who want to devour us—are the expression of the human id, that part of us that is unsocialized, that wants what it wants without thought of consequence. The hot vampires of paranormal romance allow us to fantasize about one kind of unsocialized behavior. But the murderous vampires allow us to explore even darker fantasies.

The vampires in my own new release, Sanguinary, don’t have a sparkle among them; they are, for the most part, more beast than beauty (with one cowboy-vampire exception)—as are the vampires in almost all of the movies on my “Top Five” list below. So in no particular order, here are my top five favorite vampire films:

30 Days of Night: I love the fact that the vampires in this film are truly monstrous—they look like they’ve been transformed into rat-faced horrors with sharp teeth, and they are utterly vicious. I also like the nice shout-outs to Dracula: the vampires show up on a ship and come slinking into town without warning to take over.

From Dusk til Dawn: Again, these vampires are brutal. I love the fact that they have a vampire biker bar and that unsuspecting travelers are drawn in. There’s lots of blood and gore, but my favorite part is the implication of the last image of the film as the camera pulls away from the back of the bar and pans down: the vampires inside the bar were only the tip of the iceberg. They’ve been around for a long time, and the coming of dawn implies only a temporary reprieve.

The Lost Boys: Keifer Sutherland as the Peter Pan of vampires. What could be better? I love the setting of this film (sunny California is such a ridiculous place for vampires to live!), I love the odd familial element of the head vampire courting the divorced mother, and I love the Coreys Haim and Feldman as comic-book-trained vampire hunters.

Fright Night: I’m going to break with general critical trends here and say that I love the 2011 remake of Fright Night. I think that Colin Ferrell made a great vampiric neighbor, all creepy and stalkerish. And David Tennant as the freaked-out, washed-up, checked-out vampire hunter who gets back in the game absolutely rocked.

Blade: My favorite movie of the Blade series is the first one (though I also like Blade: Trinity, wherein Jessica Biel kicks much ass). I don’t know that I’ve ever seen a scene any creepier than the opening of Blade, where the sprinklers come on in the back-room nightclub and cover everyone in blood. The vampires dancing in blood while the humans scream is an amazing visual example of the sensuality connected to the horror of the vampire.

What about you? What are some of your favorite vampire movies? I’m always on the lookout for more, so I’d love to hear your suggestions!

“Are you looking, Garrett?” the small one asked.

“Maybe.” He smiled at her, his voice playful. My stomach curdled at the intimacy I heard there—and at the realization that my partner hadn’t fully briefed me on what to expect tonight.

“Your friend doesn’t like it when you flirt,” the taller one said.

I glared at her. Vampires should not know more about me than I do.

“I’ll have to see that she gets over it,” a voice drawled from behind me. I whipped my head around in time to see a man standing up from a barstool behind me. I hadn’t even noticed he was there.

God knows how I could have missed him.

He wore jeans and a dark blue button-down shirt. He had on dark brown cowboy boots, and as he turned away from the bar, he picked up a black felt cowboy hat from the seat next to him, placing it on his head. On anyone else, I might have assumed that the hats and boots were an affectation. On him, they looked perfect. He was utterly beautiful, with bright green eyes and dark hair that curled down to barely brush the back of his collar.

I am undercover, I reminded myself sternly. Here to do a job.

When Garrett caught my gaze in his, flicking his glance toward the cowboy vamp, it was all I could do to keep from sighing aloud.

Would it have killed my partner to be a little more descriptive when he briefed me?

Of course that was the vampire cowboy I had to get close to tonight.

No making eyes at the informants, Cami.

But damn, he was hot.

“Nice scars.” His gaze skimmed along my bared shoulder.

“Thanks,” I said, almost breathless.

And I am absolutely not attracted to vampires.

I could keep telling myself that. 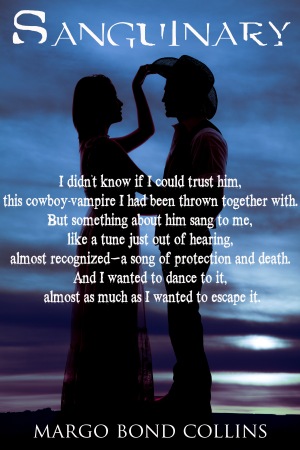 Margo Bond Collins is the author of urban fantasy, contemporary romance, and paranormal mysteries. She lives in Texas with her daughter and several spoiled pets. Although writing fiction is her first love, she also teaches college-level English courses online. She enjoys reading romance and paranormal fiction of any genre and spends most of her free time daydreaming about heroes, monsters, cowboys, and villains, and the strong women who love them—and sometimes fight them.
_____________________________________________