In Homer’s Odyssey, the enchantress Circe gives Odysseus the following advice about the sirens he must pass on his ocean journey home:

First you will come to the Sirens who enchant all who come near them. If any one unwarily draws in too close and hears the singing of the Sirens, his wife and children will never welcome him home again, for they sit in a green field and warble him to death with the sweetness of their song. There is a great heap of dead men’s bones lying all around, with the flesh still rotting off them. Therefore pass these Sirens by, and stop your men’s ears with wax that none of them may hear; but if you like you can listen yourself, for you may get the men to bind you as you stand upright on a cross-piece half way up the mast, and they must lash the rope’s ends to the mast itself, that you may have the pleasure of listening. If you beg and pray the men to unloose you, then they must bind you faster.

Originally, the sirens were depicted as winged creatures who lived on land (“in a green field”)—but eventually, they were conflated with the myth of the mermaid, the half-woman, half-fish sea  creatures, also depicted as seducing sailors into the ocean and then dragging the hapless men to their watery deaths.

In recent years, science has attempted to explain away mermaid myths, generally claiming that the sightings must be of other sea creatures. Most often, mermaid sightings are explained as actually being sightings of manatees, dugongs, or even seals, distorted by distance or water. 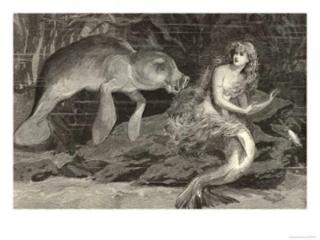 Despite these explanations, people continue to be fascinated by mermaids. In her article “The Monstrous Caribbean” from The Ashgate Book of Monsters and the Monstrous, Persephone Braham suggests that “Mermaids represented the seductive but atavistic internal ‘other,’ which could, perhaps, be domesticated” (36)—but the continual interest in mermaids suggests that we prefer these primal monsters remain wild, unconstrained by modern explanations.

In “Rejecting and Embracing the Monstrous in Ancient Greece and Rome,” D. Felton argues that “The Greek myths repeatedly present monsters being conquered by gods and men; the forces of order, reason, civilization, and patriarchy inevitably prevail in Greek thought” (104). Sirens and mermaids, though, ultimately suggest that some monsters can’t be tamed.

In Siren’s Kiss, Clay attempts to explain away his first sighting of Skyla:
If I hadn’t been staring at the tiny island so intently, I wouldn’t have seen her. As it was, a ripple of the water in the moonlight caught my attention first, then the quiet splash of a fish jumping—the same sound I’d heard on the Texas coast probably hundreds of times in my life.
In the next moment, though, a fin flipped up, fracturing the moonlight into a thousand dark droplets before slapping down flat against the water. A few feet away, a sleek head emerged from the sea before disappearing again, and I leaned forward, blinking and peering into the darkness.
A seal, maybe? Were there seals in the Mediterranean? I listened carefully for the distinctive bark, but heard nothing other than the traffic passing above.
There it was again. Small, rounded—and I could almost make out a face.
Was a person swimming out there?

Her kiss might save the world . . .Unless his kiss kills her first.
It’s been almost two thousand years since the mer-shifter Skyla walked the streets of Athens—not since her heart was broken by a human man and she exchanged the land and sky for the ocean depths. Ever since, she has lived in the underwater ruins of Atlantis, studying with the priestesses of the goddess Amphitrite, refining her mermaid powers and ignoring her human half.
But her studies are interrupted when she is called upon by Poseidon himself to investigate rumors that the world above is being polluted by the magic of creatures from another realm—and worse, that the ocean kingdom of the mer-people might be next.
When her arrival in modern-day Greece lead her to an American detective, Skyla realizes that the magical problem she’s been sent to research is bigger than she anticipated—and that one human’s kisses might be more dangerous to her, and her world, than she ever could have imagined.