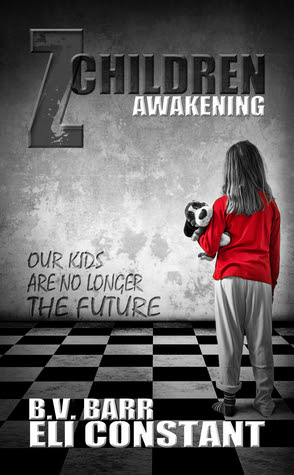 Humanity’s advancements in medicine, meant to eliminate disease and extend life, have led to a macabre reality of childhood vaccinations gone terribly wrong.

Kids have transformed, changed into ravenous beasts that are nightmarishly quick, disproportionally strong, and void of empathy.

No amount of planning or preparation could have saved the human race against this unexpected attack, centralized in the heart of every human home, and the U.S. is quickly thrown into a chaos of Z Children. By the end of the first day, the entire world is jolted into a veritable hell on earth. Yet, there are survivors- individuals who, by luck, skill, or circumstance, lived through the initial wave of destruction. These ‘lucky’ ones will join together, bonded in their quest for survival. They will try to maintain their humanity in a world where children have graduated from bubble baths to blood baths.

And they will try to find an answer to the only question that matters now: What will tomorrow bring?

Eli attended USC-L, Columbia College, Texas A&M, & George Mason University. She studied everything from Mariculture to Differential Equations. Settling on Biology, Eli participated in research fellowships in Texas and at NIH, worked a few random jobs, and finally settled into a Virginia lab where she focused on mastering diagnosis procedures and implementations of histology and pathology.

Choosing to be a dedicated homemaker after the birth of her first child, Eli rediscovered her passion for writing. She’s never regretted the decision; not only are her kids the most amazing creatures, but writing fulfills her soul in a way science never did.

Ben has been teaching Survival, Evasion, Resistance, and Escape (SERE) continually since 1981 when he joined the USAF as a “Survival Instructor”. In that Thirty+ year period, he has taught all aspects of SERE, trained at both domestic and international schools, written SERE doctrine and instruction, researched  and developed cutting edge programs  for dealing with both the psychological and physical challenges of survival, tested new equipment, written numerous papers on equipment and SERE-related disorders, and taught thousands of classes. Ben’s research and program development is the basis for many of the national and international survival schools in operation today. He is a USAF Master SERE Instructor.

Members of the Rangers, Green Berets, Para-rescue, Combat Control, Navy SEALs, Air Force Crew Members and MARSOC have all been his students. Outside the military, he has taught people from the DEA, Local Law Enforcement, Department of Natural Resources, the FBI, and other Federal Agencies. With over 12 years in the disaster mitigation and security fields, his advice on the development of advanced survival systems is irreplaceable and his knowledge of the physical and psychological aspects of both manmade and natural disasters is unparalleled in the survival world.

Z Children: Awakening, written with Eli Constant, is Ben’s first official foray into fictional writing. His technical expertise has proven a valuable asset in the development of plausible situations, appropriate survival responses, and how the world would really operate at the ‘awakening’ of an apocalypse.