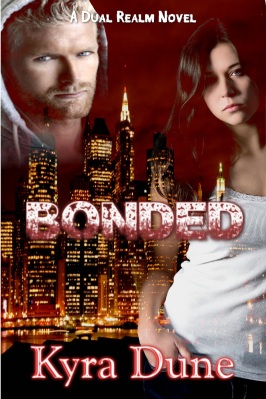 Title: Bonded (A Dual
Realm Novel)
Author: Kyra Dune
Genre: YA Paranormal
Romance
Cover Art: Shadow Portal Productions
AMAZON
http://www.amazon.com/Bonded-Dual-Realm-Novel-Novels-ebook/dp/B00PNUO508/ref=la_B00A5WOHGQ_1_18?s=books&ie=UTF8&qid=1418065724&sr=1-18
Blurb
A man running from his past.
Desperate to escape the
person he once was, Trey is constantly on the move. All he wants is to go home,
only he can’t do that unless he can find a way to atone for the sins of his
past. But can a man with so much blood on his hands ever hope to find redemption?

A woman hiding from her
present.
Innocent of any wrongdoing,
Sarah is nonetheless in serious trouble. Her brother’s actions have left her a
target for a drug dealing gang leader who will stop at nothing to get back what
belongs to him. With nowhere to run, how long can she stay alive?
A chance for the future
Two worlds collide in a dark
alley beside an abandoned clothing store, sending Trey and Sarah down a path
neither could have imagined they would ever follow. Together they can mend
their broken lives. If they don’t rip each other apart first.
Excerpt
“No. I’m only passing through.
I don’t like to stay in one place for too long.” Too great a chance of the past
catching up to him.
“Oh. So you’ll be leaving the
city some day?” Her tone was aiming for nonchalance but it wasn’t quite hitting
the mark.
“Today. Right after I drop you
at school.”
She drew in a breath as if she
meant to speak, then pressed her lips into a thin line. Pink lips, covered in a
kind of sparkly gloss which gave them the appearance of being wet. Trey wondered
what it would taste like to kiss them. Alarmed by the errant thought, he
wrenched his gaze away. The voice of his reflection chuckled in the back halls
of his mind.
“Where will you go?” Sarah
asked.
Trey shrugged. “Wherever the
road takes me.”
“Maybe this is a rude question
to ask, but why?” She looked up at him. “Why are you wandering around the
countryside? What happened to you?”
Tension knotted across the back
of his shoulders. Careful, the voice of his reflection whispered
mockingly. Wouldn’t want to lose your temper.
“I don’t like to talk about
it,” Trey said. “It’s not a nice story.”
“It’s okay.” Sarah laid her
hand lightly on the sleeve of his hoody. “I understand.”
Trey gritted his teeth against
the urge to sling her hand away. She didn’t understood. Not at all. Part of him
wanted to make her understand. Maybe then she would stop looking at him
like he was the answer to all her problems if only she could find a way to
convince him to stay.

Kyra Dune was born in
Oklahoma, but spent most of her life travelling with her family. She is the
author of more than twenty fantasy novels, including: Shadow of the Dragon, Elfblood, and Firebrand. As a child, her favorite stories were those that told
of ordinary children being whisked away to magical lands. She has yet to find
her own secret wardrobe or rabbit hole, but she hasn’t given up the search. You never know what might be waiting over the next rainbow.
Connect With Me: Facebook      Twitter    Blog    Website     Goodreads   Pinterest