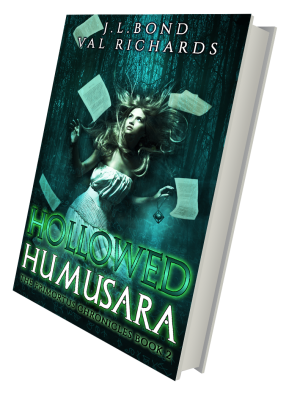 Hollowed Humusara (Primortus Chronicles #2)
by J.L. Bond and Val Richards
Release Date: 11/26/14
Summary from Goodreads:
It begins again! Skylee Porter thinks the worst is over. She has faced her greatest fear, the monstrous black-eyed Brinfrost and survived with the help of Chrism, her shape-shifting sister. Sky even had the courage to finally admit her true feelings to Will.

But something has changed. The three people she trusts the most are acting strange. Will seems distant. Her talkative sister has clammed up. Even Airon is keeping secrets.

Soon, Sky discovers the leaders of the Primortus have plans for her. Then, to her dismay, they threaten to take away her magical book. The Humusara, the very thing that tethers her to the world she so desperately wants to protect. And now, the earth is trembling again. Could there be another Day of Disaster?

Dark powers are at work. Two prophecies loom on the horizon. One declares she’s the hope of humankind. While the other proclaims she’ll destroy us all.

“Come on now, open your eyes.”

“Aaaah,” moaned the teenaged girl as she tilted her head toward the sound of the voice awakening her. “Where—where am I?” she stammered, trying in vain to lift her eyelids.

Skylee Porter was in a large, rectangular room lined with oil paintings and sculptures. Her dust-covered jeans were torn at the knees and her wavy blonde hair was spread around her in a tangled mess. A trickle of dried blood marked a trail from her ear down her neck and her left knee throbbed painfully.

Without warning, the nightmarish image of a mask-like face with black eyes weaved its way into her mind. Brinfrost! She squeezed her eyes shut tighter and struggled against the hands that held her. No, he’s got me! It’s not him, she told herself in relief. As she settled back, she felt the weight of her necklace lying on her chest. My Elementum, thank goodness it’s safe. Skylee couldn’t bear the thought of losing it.

The powerful amulet and an extraordinary book, called the Humusara, were her most precious possessions. They had once belonged to her father, Lee Porter. He had died on the day she was born—the Day of Disaster—the day the necklace went missing, at least until her mother’s wedding day.

That was when she learned the Elementum and Humusara had been decreed to her in her father’s last will and testament to be passed down on her fifteenth birthday. She was surprised when her mom gave them to her early. But the greatest surprise came when she discovered they possessed magical powers. 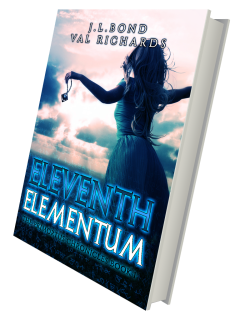 J.L. Bond
and Val Richards have much more in common than writing.  They are both Army brats, grew up in the hills
of Tennessee, attended the same college and worked the same first job. They share
an obsession for Doctor Who, Harry Potter, and have an enduring love for all
things Tolkien. Since they can’t live in Middle Earth, the call of the ocean eventually
pulled them to Florida where, together, they form the nearly fearless writing
duo of THE PRIMORTUS CHRONICLES.
Their debut
novel, ELEVENTH ELEMENTUM; Book 1, was released in 2012 to excellent reviews. The
second book in the trilogy, HOLLOWED HUMUSARA launched in the fall of 2014.
J.L. and Val are currently working on Plagued Primortus, the final book in the
series…when they aren’t daydreaming of joining a certain wizardy trio for a
ride in the TARDIS to Rivendell.
Author Links: