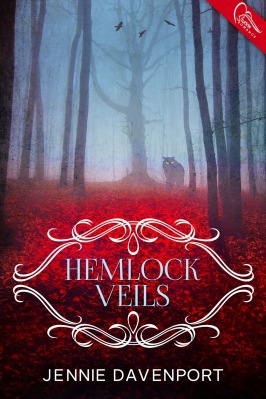 When Elizabeth Ashton escapes her damaging city life and finds herself in the remote town of Hemlock Veils, Oregon, she is smitten by its quaint mystery; but the surrounding forest holds an enchantment she didn’t think existed, and worse, a most terrifying monster. The town claims it vicious and evil, but Elizabeth suspects something is amiss. Even with its enormous, hairy frame, gruesome claws, and knifelike teeth, the monster’s eyes speak to her: wolf-like and ringed with gold, yet holding an awareness that can only be human. That’s when Elizabeth knows she is the only one who can see the struggling soul trapped inside, the soul to which she is moved.

Secretly, Elizabeth befriends the beast at night, discovering there’s more to his story and that the rising of the sun transforms him into a human more complex than his beastly self. Elizabeth eventually learns that his curse is unlike any other and that a single murderous act is all that stands between him and his freedom. Though love is not enough to break his curse, it may be the only means by which the unimaginable can be done: sacrifice a beauty for the beast.

Another howl lifted from the forest and for the briefest instant a light flashed deep within the trees, their dancing shadows backlit by the panicked beam. Tightening her drenched strap around her shoulder, she crossed the asphalt and stopped in the mud at the other side. This forest was different than the rest, even different from its companion across the highway. Something lingered here. Someone, maybe. And if someone was here—a Good Samaritan, perhaps—it might save her the three-mile trek to Rhododendron. Taking just a half-step closer, she peered into the trees.

“Hello!” she called, trying to make her voice boom, but rainfall swallowed the sound. Her teeth chattered and water poured from the rim of her hood, impairing her vision. “Anyone there? My car broke down and—” She cut herself off. I’m a helpless woman, she may as well be shouting. Alone, with only my father’s rusty pocket knife to defend myself!

The forest didn’t respond, and she should have been relieved. Turning, she folded her free arm over herself and walked the slick shoulder, heading in a westerly direction and trying to avoid the largest puddles. A bend in the highway lay just ahead. Surely she would find something beyond its curve, maybe some sign of civilization.

Vegetation rustled behind her. Heavy heels scraped on the gritty, wet road.

She twisted, readying her stance—wishing her pocket knife wasn’t buried inside her bag—but what the beam of her flashlight caught wasn’t what she expected. A slender, elderly man with a coarse, whitish beard that came to his waist shielded his eyes from her light. His skin hung with wrinkles almost as pale as his beard. A large spotlight dangled from his neck, amidst the bristly facial hair, and lit his black leather boots. He wore a flannel shirt beneath fishing waders, an open yellow slicker, and a yellow sou’wester hat, the large rim falling down the back of his neck. He looked like a fisherman taken right off the Pacific Ocean and planted in the middle of Mt. Hood National Forest.

His hand still shielded his red-rimmed eyes, but it wasn’t until he cursed that she realized her light blinded him.

“Do you have any idea what you just did?” His vocal cords sounded compressed, perhaps from old age, making his voice thin and high. He took an irate step to-ward her.

Drawing his decrepit thumb and index finger together, he grumbled, “I was this close!” The double-barreled shotgun in his dropped hand—why didn’t she notice this sooner?—now swung.

“Whoa,” she said, lifting a hand. With the current events of her life, she shouldn’t have been surprised to run into a nut job in the middle of the forest.

“I had it right in my sights! I could’ve changed everything for our town if you hadn’t scared it away!” He exhaled, clouding the air with an angry burst.

Wiping a hand down his face, he looked in the direction he’d come—through the forest—then in the direction she’d been headed—west—then finally at her broken-down car across the road. His breath puffed at a measured rate. He wasn’t crazy, just irritated. With a tone of defeat, he said, “There’s nothing I can do for you out here, ma’am.”

“Thanks for your time anyway.” She tried not to sound too deflated.

When she resumed her steps, he called from behind, “Not sure if you know this, but it’s a three-mile walk to Rhododendron.”

She turned back, adjusting her leather bag in the hope its contents weren’t completely soaked through. “It’s better than six miles back to Government Camp.”

“You know the area?”

His eyes narrowed, and his beard dripped. “Walking alone isn’t a smart idea,” he said in that thin, almostbackwoods-sounding tone. “Not through these parts, ma’am, not at this time of night. You have any idea what’s out here?”

He raised a brow then chuckled, and though she hardly saw it through his beard, his smile was warm. “Much worse, ma’am.” Her eyes followed his, but she saw nothing. His jaw rolled rigorously as he chewed, then he spat to the side, leaving specks of brown in his beard; they washed away quickly. Finally, with a twinge of regret, he said, “A town’s one mile south of here, right through these trees.” He motioned to his left, into the forest he’d emerged from. It seemed his admittance of this town was the result of some internal battle being lost.

“My town: Hemlock Veils. We call it Oregon’s best kept secret.” He spat again, giving a proud half-smile. “You feel like a midnight hike?”

About the Author
Though Jennie Davenport was raised throughout the Midwest, she now lives in the little desert mining town of Bagdad, Arizona, where six guys beg for her constant attention: a husband, three young, blond sons, a German shepherd with a name much mightier than his disposition (Zeus), and a black cat named Mouse. When she isn’t trying to run her home with as little casualties as possible, Jennie loves snuggling with her family, laughing with her friends, delving into brilliant entertainment of any vein, and playing outside. Despite the way being a writer is in her blood, and the wheels of her writerly mind are constantly turning, Jennie likes to think that in another life, she would have been a Broadway star. Or an American Idol finalist.

Jennie lives for the fall, and not just because of her adoration for the NFL (Go Broncos!). In her perfect world, she would have the springs, summers, and falls of Colorado, and the winters of Arizona—someplace where the climate and weather would allow her to go on a trail run all year round. But even though she prefers the pines and mountains, she is a devoted fan of all nature, from sandy beaches to woodsy cabins, and all are her greatest inspiration. She believes nature is one of the best healing remedies, with a magic all its own.

Jennie’s passion for writing is the way she survives, and is as vital to her sanity as oxygen, caffeine, food, and music. Even before she began writing it, well-told, original, and character-driven romance was always her weak spot. Add the paranormal or magical realism element and she may never make it back to reality.

One comment on “Spotlight On: Hemlock Veils by Jennie Davenport”