Kissing Frogs
by Alisha Sevigny
Release Date: 11/18/14
Swoon Romance
Summary from Goodreads:
Popular party girl and high school senior Jessica Scott has a secret: she used to be a nerd — a big one; a goody two-shoes, grade-skipping, all-state spelling bee champ. But she lost the braces, put on some contacts, and applied all her academic genius to studying and imitating the social elite. Now she rules the school from the upper echelon of the high school realm. With her cool new friends and hottest-guy-in-school boyfriend, life’s a beach — and that’s where she’s headed for Spring Break. That is, until her teacher breaks the bad news that she’s failing Biology — and her only chance to make up the grade is to throw away the culminating trip of her hard-earned popularity and join the Conservation Club in Panama to save the Golden Frog.
Unable to let go of her faded college dreams, Jess finds herself in a foreign country with a new social crew, and one handsome face that stands out as a blast from the past, threatening to ruin her queen bee reputation. Travis Henley may have grown up, but he still likes to play childish games and as payment for retrieving Jess’ lost ring from the bottom of a jungle pool, he wants three dates. While Jess does battle with spiders, snakes, wildfires and smart mean girls, she desperately tries to hang on to the last vestiges of her popular existence like the Golden Frog from its webbed toe. But as she starts to care about something more than tanning and texting – a species on the verge of disappearing forever – she may realize the worth of her inner nerd, and the one frog in particular that could be her prince in disguise.
Set in the lush and tropical El Valle de Anton, this modern fairytale re-imagining of “The Frog Prince” is toe-curling contemporary romance with an environmentalist heartbeat, in the tradition of Stephanie Perkins.

“Whatever you say, Princess.” He grins and ruffles my hair. I glare at him, smooth my hair back into a ponytail, and stare straight ahead. I must be hallucinating. That’s the only explanation why Travis’s leg is pressed against mine. Travis, who’d known me before my phoenix-like rise from the ashes of uncoolness. In fact, I’m clinging to the faint hope that everything since that day in Mr. A.’s class has been some kind of extended hallucination: Miles, Panama, and now Travis? Maybe there was a chemical leak in lab and I’m in a coma right now.

“You will all love the place, I am sure,” Hector yells over his shoulder as Latin music blares from the stereo. We zoom along the waterfront. Tall buildings swirl up into the sky and construction looms everywhere as Panama hurries to catch up to its reputation as a thriving metropolis.

Trying to get a grip on my shock, I turn to the girl on my left who’s reading a book on Panama. “Do you know how much longer it is?” I ask. Travis leans over the seat to talk to a guy with shaggy brown hair who managed to escape being spit on. What’s he telling him? My chest tightens.

“Around an hour, I think,” she says in a soft voice, looking up from the guidebook. The dark French braids are vaguely familiar and I place them from biology class, front row. Her name’s some sort of musical instrument. Harp, maybe?

My “thanks” is drowned out by an enormous truck rocketing past, inches from side swiping us. Hector honks and gestures wildly. “Que te pasa! Ove!” Horns blare and fists shake. Panama traffic makes driving back home in Seattle look like meditation practice. I grab the seat in front to keep from falling into Travis as we swerve to avoid another large truck.

The phone shifts in my back pocket, jabbing me in the butt. Discreetly, I pull it out to see if Ky’s texted yet. All electronics are forbidden. Mr. A. has peculiar ideas about doing most of

our research the old-fashioned way. Personally, I don’t think he wants to be responsible if anything gets lost or stolen. Only cameras allowed. Which I, of course, didn’t bring, since there’s nothing I want to remember about this trip.

My stomach clenches. It’s fine. I reassure myself. They’re all travelling today as well; I probably won’t hear from anyone until tomorrow. Ky and Alyssa were horrified when they heard the news and vowed to keep tabs on Miles. We made up after our fight, getting back together, but things are still kinda shaky. Even though he’d acted like a major D-bag, somepart ofme is reluctant to let go after all the work I’ve put into that relationship. Into all of the relationships with my new friends and new life.

I cast a sidelong look at Travis. And now this. He could ruin everything. 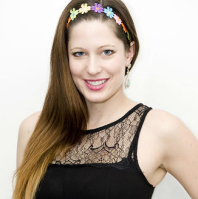 Alisha Sevigny holds a degree in Sociology and Professional Writing from the University of Victoria, is a film school graduate, former literary agent and current Social Media and Communications Director for an award-winning English school. A shameless romantic, Alisha and her husband have travelled the world together. On a recent trip to Panama with their new daughter, Alisha fell in love with the country, culture, and their national emblem, the Golden Frog. She was inspired to write her first Young Adult novel, Kissing Frogs. Born and raised in Kitimat, British Columbia, Alisha has always had a strong connection to the environment and conservationist spirit. She now lives in Toronto with her family.

2 comments on “Spotlight On: Kissing Frogs, by Alisha Sevigny”