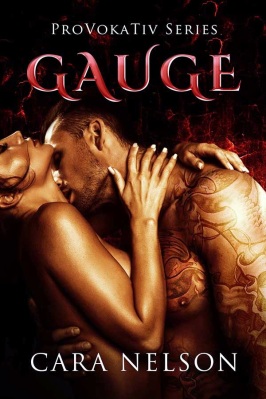 Gauge
by Cara Nelson
Release Date: November 2014
New Adult/ 17+
Summary fron Goodreads:
Gauge Bronson has a simple rule:
never mix business with pleasure. As the lead singer and guitarist of
Provocative, he has his fair share of girls throwing themselves at him, but he
refuses to get involved with clingy groupies or women he works with. When
beautiful, beguiling Brynn joins the tour, though, he can’t deny there’s
something about her he finds irresistible. It’s been a long time since a woman
didn’t fawn over him. He’ll have to keep his appetite in check and keep her at
a distance if he’s going to remember that she’s off limits.

Aspiring journalist Brynn Morgan has been given the chance of a lifetime to
interview a rock band for a new magazine and launch her career. When she learns
her assignment is the band Provocative, whose music she’s never liked, any
disappointment is overshadowed by her excitement and determination to write a
killer story. Plus, the fact that she’s not a fan will make it that much easier
to keep things professional. One look at Gauge, though, and she feels an
instant attraction to the cocky, tattooed rocker. But despite the sparks flying
between them, she’s got a job to do.

As Brynn heads out on a world tour with the band and tries to get them to spill
their secrets, the sizzling chemistry between her and Gauge becomes harder and
harder to ignore…

I followed the woman to a table in the back of the room and saw four people sitting there: one middle-aged man with spiked hair, graying sides, and a business suit on, and three younger guys—the ProVokaTiv guys.

“Yes, hi. And you must be Dave Gregors,” I said, extending my hand.

“Yes,” he said, shaking my hand. “Did you find the restaurant okay?”

Up until this point, I hadn’t looked any of them in the eye yet.

“So, let me introduce you to everyone, and then we can order our food and get down to business, Brynn.”

“Great,” I said. Now I looked up at everyone and saw two sets of eyes on me. The third guy was looking down at the small screen of his phone and licking his lip like he was staring at a piece of candy that made his mouth water. That one was Hunter Martinez.

“Okay, guys, this is Brynn Morgan from The Rift. She’s going to be your shadow this summer while she works on the main piece for the magazine. I can only hope that you’ll all give her your best side, or better than what you sometimes give,” Dave said with a slight chuckle. His eyes said he was serious.

I looked at everyone and smiled. Hunter looked up briefly and paused, scanning me up and down, fixing his eyes on my chest.

“Brynn, this is Simon Jefferson, Gauge Bronson, and Hunter Martinez.”

They smiled at me and didn’t say a word. Oh God, was I supposed to say something, like a speech?

“I’m excited to work with you all this summer and write a great piece about you,” I said.

“And what would make it great?” Gauge asked.

I looked over at him. He was so much better looking than in his videos or pictures. With his full lips, short brown hair, and perfect body, he reminded me of a tattooed version of Theo James, the gorgeous guy from Divergent.

“Well, learning about the real side of you and sharing that with all your fans,” I said. I’d never felt so unsure of myself and I feared that I was ready to start rambling on like a crazy woman. I bit my lip and shut up.

“Oh, all you need to know about us is on YouTube,” Hunter said.

“There has to be more to you than that,” I blurted.

Hunter’s face broke out into a cheeky grin and Gauge busted out laughing.

“You’ve got spunk, “Simon said. “Probably a good thing, because you’re going to need it.”

“Before long, you’ll forget I’m even around,” I said, smiling at them coyly.

“That’s okay, Dave, I can handle it. I figure that if I’m going to be hanging out with these guys, I’d better be able to hold my own, right?”

Dave nodded. Everyone else looked at me casually, making me feel like I had to take the lead of the conversation.

That does make sense, I thought. After all, I’ll be interviewing them and creating the story.

“I’ll give you a lay-out of how we’ll approach everything this summer. At any time, feel free to ask me whatever questions you may have, as well,” I said.

“I have a question,” Hunter asked, finally looking up and raising his hand. I wasn’t sure if he was mocking me, but he had my attention.

“Are all your friends beautiful, ambitious journalists like you?”

“I…uh…what?” I sputtered. “My friends do happen to be brilliant and beautiful, but I’m the only one who’s a journalist,” I said. There, take that!

“So, compared to your research, what do you think of us right now?”Simon asked, staring at me with his serious intense blue eyes. They were almost hypnotic.

I knew that question was it: the chance to show that I was honest and also gain some control of these three guys. All of them were worldlier than me, a few years older, and definitely were used to getting their way.

“Who should I start with, then?”

“Me,” Hunter said. He leaned forward and looked every bit the arrogant cock that he was said to be.

“Sure. You, Mr. Martinez, love the spotlight more than anyone else in the band. ”

“That’s for sure,” Dave said. I looked at him, almost forgetting he was there. I was just competitive enough to get wrapped up in the odd meeting. It was hard to imagine that many business meetings started out like this. It was kind of thrilling.

“You’re trying to break away from the logical part of your mind, becoming everything you thought you’d want to be when you were younger. If I recall correctly, accounting was in your future. Since that’s no longer likely to happen, you are trying to break boundaries and be everything but predictable. That comes out through all your sexual trysts, flamboyant statements—ones you probably only care about half the time—and constant demand for attention. If I was going to give you a nickname, it would be Temper Tantrum, because you just keep going until people’s defenses wear down, regardless of what it is. Oh, and as far as the DUIs you’ve had, I’m guessing you were a sucky driver even before them. ”

About the Author
Cara Nelson is the author of the bestselling ‘Men of
the Capital’ series. Her books hit the Amazon store in the summer of 2014 and have
since been enjoyed by over 50,000 readers! She is known for her bold
characters, hilariously witty dialogue and touching romances.
Interested in a fun, light and breezy read? Her readers recommend you start
with ‘The Billionaire’s Hotline’.
Author Links:

One comment on “Book Blitz: Gauge, by Cara Nelson”