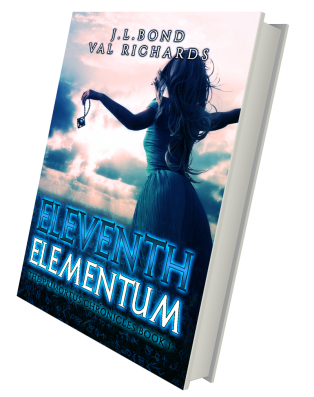 Eleventh Elementum
(The Primortus Chronicles, #1)
by J.L. Bond and
Val
Richards
Release Date: 12/14/14
Get Over It Publishing
Summary from Goodreads:
It has begun! Fourteen years
after a catastrophic disaster, the world has regained its balance with the help
of the Primortus. They have secretly walked amongst us since the beginning of
time, protecting the earth with the power of the elements. When a fourteen-year-old
girl is given two mysterious gifts from a father she never knew, she is drawn
into their dangerous world of magic.
She must learn to wield the power
of the Eleventh Elementum to survive. With the help of Will (her best friend),
his cousin and her new stepsister, she seeks out the evil that threatens New
Zealand. But a black-eyed stranger is watching their every move. Now, two
powerful beings will battle one another and the outcome will determine our way
of life.

Skylee ran her fingers through the crumpled paper and found a smaller box. Her eyes widened as she opened it and peered inside. The box held a beautiful necklace, which appeared to be very old. Upon closer inspection, she realized its dark gray metal shone like new, reflecting tiny flecks of blue. She had never seen a lovelier amulet. Her eyes moved back and forth from the necklace to the carving on the book. They were exactly the same size and shape.

Plucking the necklace from the box, she held it up by its long silvery chain. The medieval looking amulet swayed and sparkled in the light as if it were covered in diamonds. Inside its circular center were four distinct etchings. She brushed her fingers across the symbols wondering what they meant, and then she turned the amulet over. On the back were more etchings. One looked like an inscription and the other was an odd symbol. They appeared to be in the same language as the lettering in the book.

Skylee didn’t know what to make of it, yet she had a strong urge to put on the necklace. Draping it over her head, she crossed the room and stood at the full-length mirror. Her blue eyes narrowed as she frowned at her reflection. She had tried to tame her wavy blonde hair into some kind of twist, securing it at the crown of her head in an attempt to look more mature. Now she wondered if it only accentuated her most embarrassing feature her protruding ears. She brushed an unruly curl away from her face and examined her pale complexion. Maybe the extra makeup was too much. She usually only wore a little mascara and tinted lip-gloss. She shrugged and made a face at herself in the mirror. Then her eyes settled on the sparkling necklace, which was resting on the soft green fabric of her dress.

“So, this is my inheritance,” she said, holding it up.

She curiously gazed at it and, to her surprise, white crystals were forming on its surface. Suddenly a sharp pain seared her fingers and she quickly let go, leaving it dangling from the chain around her neck. The amulet was as cold as ice. Confusion overwhelmed her. Her heart pounded loudly under the freezing metal. She took a deep breath and tried to calm down. But as if being driven by some force that she could not understand, Skylee walked to the book. She removed the amulet and, with icy cold fingers, placed it into the diamond shaped carving.

A brilliant glow grew from the heart of it, intensifying in brightness until its radiance held her gaze. Then without warning a jolt of energy surged through her fingers. She shrieked and tried to pull away from the book, but her hand wouldn’t budge.

J.L. Bond and Val Richards met in college in
Clarksville Tennessee, where Val excelled in Math and J.L excelled in creative
ways to talk Val out of going to class. A few years later…okay, more than a
few, they found themselves living about an hour away from one another in Florida
and joined forces to write the Primortus Chronicles, YA fantasy- adventure
series.  Nowadays, J.L. likes to remind Val that Math isn’t necessary for
writing.