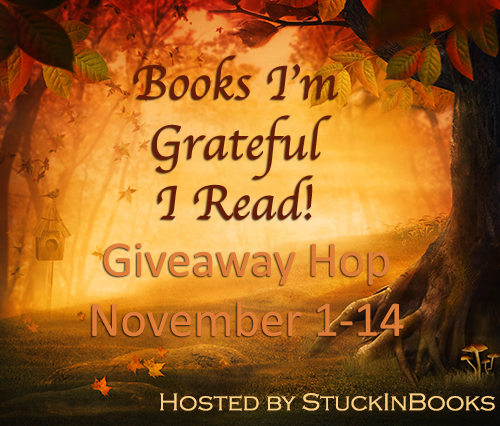 Welcome to the Books I’m Grateful I Read Blog Hop, hosted by Stuck in Books.

I’ve been staring at this screen for quite a long time now, trying to decide which of the many, many, many books I love I should feature in this post. I could come up with a huge list of Books that Changed My Life–but there’s one in particular that set me on my path to becoming a published fiction writer–and when I discovered that it is coming out in ebook for the first time ever this month, I knew I had to feature it: Robin McKinley’s novel Sunshine.

Sunshine certainly wasn’t the first vampire novel I read. It wasn’t the first urban fantasy novel I read. But it was certainly among the best. And the narrator, Rae, had a voice that echoed in my mind the same way the stories I sometimes told myself did. Sunshine also came to me at an opportune moment–just as my friend Bill suggested that I try NaNoWriMo, a then-still-fairly-new online program that challenged people to write a novel in thirty days.

So I did. I wrote my first novel that November in New York. And I wrote it about a vampire, because I had just finished reading Sunshine, and thus vampires (and snarky heroines) were on my mind. That book became Legally Undead, my third published novel.

And I still read Sunshine about once a year; it’s still that good.

For this blog hop, I’m giving away an ebook copy of Sunshine. I’m also giving away e-copies of my own vampire novels, Sanguinary and Legally Undead, and an e-copy of Bathory Gate Press’s latest publication, the vampire novella Night Home, by Rose Titus.

Check them all out below, tell me about a book that inspired you, enter to win, then HOP to the rest of the participating blogs!

In a world where darkness threatens, there is Sunshine . . .

Although it had been mostly deserted since the Voodoo Wars, there hadn’t been any trouble out at the lake for years. Rae Seddon, nicknamed Sunshine, head baker at her family’s busy and popular café in downtown New Arcadia, needed a place to get away from all the noise and confusion—of the clientele and her family. Just for a few hours. Just to be able to hear herself think.

She knew about the Others, of course. Everyone did. And several of her family’s best regular customers were from SOF—Special Other Forces—which had been created to deal with the threat and the danger of the Others.

She drove out to her family’s old lakeside cabin and sat on the porch, swinging her feet and enjoying the silence and the silver moonlight on the water.

But those plans disintegrate when she walks in on a vampire sucking the blood from her fiancé, Greg. Horrified, she screams and runs—not away from the vampire, but toward it, brandishing a wooden letter opener.

As she slams the improvised stake into the vampire’s heart, a team of black-clad men bursts into the apartment. Turning to face them, Elle realizes Greg’s body is gone—and her perfect life falls apart.

When college student Muriel Aubrey inherits an old house in a small town, she imagines that moving into the rural community will be deathly dull. But the old house once belonged to her eccentric granduncle, a professor said to be researching something mysterious before his untimely death. Then Muriel finds the research notes that had been hidden away in the old Victorian, and she discovers what the professor was researching: vampires.

It isn’t long before Muriel meets residents of the small town who knew the professor almost a century ago, and learns that everything he wrote in the notes he kept is true…

And then she finds herself stalked by a vampire hunter…

HOP to the rest of the participating blogs