You’ve always hated her, but you might not know the whole story. . .

Edith may not be brazen and enchanted like her twin sister, Ember, but in a world of dying magic, perhaps her simple desires are enough.

After a Selection Banquet gone awry, Edith is left without a suitor or a plan. Befriending a little white fox and occupying herself with a philanthropic project outside castle walls, Edith soon rebuilds morale and musters enough courage to reach out to her estranged twin sister.

But Ember’s been harboring an evil secret – and thwarted love and jealous can turn acts of merit into classic tales of wickedness in this new twist on an old tale. 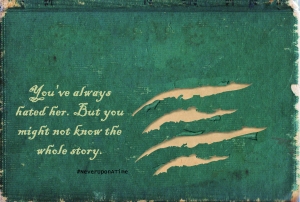 The twins were ushered to their places alongside their father at the head of the table. Suspicion and unease distracted Edith as she watched her sister’s boisterous entrance, and she completely forgot to tidy herself. She had gotten ready and gone down to the kitchens at sunrise, so whatever primping she had done was most likely melted away, brushed off or wrinkled up. As was life sometimes. Her appearance may have been untended, but every meringue was torched, every cake iced and all glasses and hearts brimming. Regardless of how prepared the dinner was, though, being prepared for blind marriage at a moment’s notice was mortifying, especially for a quiet girl. Because, for pity’s sake, who wouldn’t be a little unnerved by such an orchestrated union as was about to happen? Edith was beginning to be glad she wasn’t a sorceress or soothsayer. Who could possibly face each sunrise with any amount of morale when they knew the exact affliction awaiting them?

The dinner was a whirling blur of meaningless, superficial conversation. Then, unexpectedly in a most expectant of times, three resounding knocks echoed through the hall. It was the deep, guttural sound that makes a heart quiver behind its cage. The guests, having dropped their utensils and ceased their chewing, slid to the edges of their seats.

Ember, confidently unruffled, continued cutting her elk steak into dainty, bite-sized pieces. Edith, on the other hand, could have vomited at the sound. An overwhelming feeling of dread suddenly overcame her, its tidal wave effect nearly driving her to run away from the ridiculous scene to the refuge of her garden or her mixing bowls.

Meredith Jade was raised in a small town by parents who taught her to love reading. From the moment she could hold pencil to paper, she wrote. After graduating college and traveling abroad teaching English in Uttaradit, Thailand for a year, she came home. Writing was that home. Her writing has a range of inspirations, all a result of her voracious reading as a child and young adult. Anything from Victorian Literature to bird watching guides to NY Times best sellers have served as an agent for her imagination. Never Upon a Time is her first novel.