This week, I’m taking a short break from my RWA giveaways (though there will be a ton more!) to offer the first of a couple of giveaways from the Indie Book Fest ’14. It was a fabulous event in Orlando, Florida, and I met lots of amazing authors!

I have a great giveaway this week of a signed paperback copy of Dark Hope by H. D. Smith and a pile of signed swag from other authors, as well! This contest will run through the end of August.

As usual, I’m featuring one of my own books, too. Because Dark Hope is an urban fantasy, I’m showcasing my forthcoming urban fantasy, Sanguinary (now available for pre-order). So check out the books below, leave a comment letting me know either what you like best about urban fantasy or about one urban fantasy novel you love (it’ll be an entry on the Rafflecopter!), then enter to win!

Reese loosened his hold enough for my circulation to start back up, and the blood rushing to my palm felt like needles dancing across it. I rubbed it with the thumb of my other hand, and Reese’s gaze followed the motion.

No. No way in hell was I walking out of here with a pissed-off vampire.

That’s how cops got dead.

Instead, I took a step backwards and pulled myself up onto a barstool. Reese’s upper lip curled, revealing a fang, and I held out my hands placatingly.

I didn’t really know if I could trust him, this cowboy-vampire I had been thrown together with. He was only meant to be an informant, my visits to see him at the Blood House a cover for him to pass information to me.

But that’s not how it was working out.

Garrett had said Reese was on our side, as much as it was possible for any vamp to be. I wasn’t sure he thought of us as anything more than dinner. But he was all I had right now—my partner was too vamp-addled to help me, and Iverson and his crew weren’t rushing in to save me.

The department wouldn’t force me to stick it out, wouldn’t expect me to team up with a vampire for anything more than the most superficial of connections.

I could walk out at any time.

But if I did, it was unlikely we’d find out enough to stop whoever was killing these women.

So that left the option of going in deep.

Almost everyone who went undercover with the vamps came out addicted to their bite. The ones who could still string two sentences together, like Garrett, stayed on the force. It’s not like the Sucker Squad had cops banging on the door to join up.

We worked with what we had.

The press portrayed us as bumbling and stupid—and maybe we were. Sending detectives in against humanity’s worst nightmare? We were like little kids trying to hold back the dark with matches, bound to get our fingers burned, and worse, maybe burn the house down around us if we weren’t careful.

Going under was dangerous and ugly.

But I was beginning to think it might be necessary.

“I’ll tell you everything,” I said to the vampire snarling at me. “But I’ll need your help.”

Reese’s lip dropped back down, covering the fang.

I was glad—it was easier to contemplate joining forces with him when he wasn’t reminding me that he was one of the monsters.

Margo Bond Collins is the author of urban fantasy, contemporary romance, and paranormal mysteries. She has published a number of novels, including Taming the Country Star, Legally Undead, Waking Up Dead, and Fairy, Texas. She lives in Texas with her husband, their daughter, and several spoiled pets. Although writing fiction is her first love, she also teaches college-level English courses online. She enjoys reading romance and paranormal fiction of any genre and spends most of her free time daydreaming about heroes, monsters, cowboys, and villains, and the strong women who love them—and sometimes fight them.
_____________________________________________

Please note that the giveaway is of a signed copy of Dark Hope with the original cover:

The book has a lovely new cover, as well: 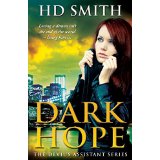 Claire, the Devil’s assistant, knows very little about the world she was dropped into five years ago, when she inherited her mother’s unpaid debt to the Demon King. She certainly didn’t expect to be a contender for the Fallen Queen’s throne, a target for the Druid King’s mafia, or a suspect in the murder of Junior, the Devil’s oldest hell spawn.

In a last ditch effort to save her life and get out of her deal with the Devil, she sets out to solve Junior’s murder only to be taken prisoner by the four most dangerous immortal hell spawn alive.

Not to be out done, the Pagan Queen Mab, claims Claire for entering her realm uninvited. She has an old debt to settle with her brother the Devil. Taking Claire from him after losing her years ago is just icing on the cake.

Will Claire win her freedom, and save herself from the Devil? Or be trapped by Mab forever?

HD Smith has been writing as a hobby for over ten years. DARK HOPE is her first full length novel. She has previously self-published two middle grade novellas in ebook format. She is a software developer by day, working for an awesome cruise line in Celebration, FL.

HD grew up in South Carolina, but has called the Sunshine State home since 1997. She has Computer Science degrees from Clemson University (BS) and Florida Institute of Technology (MS). Her other hobbies include painting and screen printing. She enjoys creating t- shirts inspired by the places in her books. For more information, visit HD’s website at http://www.hdsmithauthor.com/.