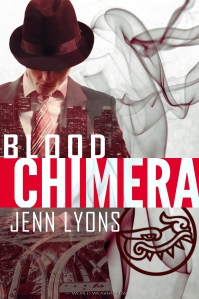 Some ransoms aren’t meant to be paid. Kidnap and Ransom negotiation used to be straightforward. The bad guys kidnap someone, and K&R expert Jackson Pastor negotiates their release, skillfully traversing a maze of bloodthirsty monsters: criminals, terrorists, police, and especially the FBI. But that was before he met real bloodthirsty monsters.

When Jackson Pastor arrives in Los Angeles to help a new client recover his kidnapped wife, he finds himself dropped in the middle of a 500-year-old war between rival European and Mexican vampire clans, a conflict that threatens to escalate into a full-on public gang war. Worse, Jackson hasn’t been brought to Los Angeles to be a negotiator. His new boss wants to turn him into an assassin. With Jackson about to be caught in the middle of a clan war, his only hope of escape may lie with a secret FBI monster-hunting task-force led by a very dangerous, eccentric wizard. Which could be a problem, since Jackson’s a monster himself.

Blood Chimera will be available in trade paperback and ebook via Amazon.com, Barnesandnoble.com, Kobo.com, and other online retailers, and for wholesale through Ingram. You can also find Blood Chimera on Goodreads.

Jenn Lyons lives in Atlanta, Georgia, with her husband, three cats and a lot of opinions on anything from Sumerian creation myths to the correct way to make a martini. At various points in her life, she has wanted to be an archaeologist, anthropologist, architect, diamond cutter, fashion illustrator, graphic designer, or Batman. Turning from such obvious trades, she is now a video game producer by day, and spends her evenings writing science fiction and fantasy. When not writing, she can be found debating the Oxford comma and Joss Whedon’s oeuvre at various local coffee shops.

World Weaver Press is an independently owned publisher of fantasy, paranormal, and science fiction. We believe in great storytelling.