Hi, all! It’s time for another RWA goodies giveaway!

This week, I’m focusing on urban fantasy and paranormal romance. I’m highlighting my novel Legally Undead and giving away a paranormal romance swag pack and a paperback copy of Bayou Scar by Mary Ann Loesch, signed by the author.

So check out the books below, then enter to win!

The ballroom was packed. More people had arrived while we were getting dressed. Women in sequined dresses and men in tuxedos sat around almost all the tables. Some of them were even eating. Couples crowded the dance floor. The band was indeed very good–they were playing a version of “You’d Be So Nice to Come Home to” and the lead singer, a tall woman in a slinky black dress, had a deep, smoky-sounding voice.

It would be easy to be charmed by this setting, by all the elegance that surrounded me.

Of course, all the vampires that surrounded me weren’t quite so charming. They were terrifying.

And in a room full of people, I discovered that it was easy to tell which ones were vampires and which ones weren’t. Some of the humans were easy to spot–the ones who were eating food were easy to pick out as humans, of course, and many of them had bandages or fresh wounds on various parts of their bodies. The parts where the veins ran close to the surface: the neck, the crook of the elbow, the wrist.

There were other humans there, too, though, humans who weren’t eating and who didn’t have any visible blood-donation marks. But they were clearly human, just as some of the other people moving around the room were clearly vampires. The vampires tended toward pallor, of course. And occasionally one flashed a fang here or there, particularly when they laughed–an effect that I found chilling. They were mostly extraordinarily beautiful, but then, so were the humans. Deirdre seemed to like surrounding herself with beauty.

It had something to do with the energy the vampires projected, I guess. They seemed strangely brittle, yet almost vibrating with a nervous vitality. I’ve seen a similar thing with people who were on the verge of an emotional breakdown but attempting to hide it. I’ve also seen it in people with bipolar disorder. It’s a sort of forced, manic gaiety verging on hysteria.

But that energy was combined with an indolence of movement. They swayed through the room slowly, languorously, all the while virtually quivering with some suppressed power.

All in all, it was just about the creepiest thing I’d ever seen–toward the top of the list, anyway, right after “Seeing My Beloved Eaten.”

I recognized now some of that same energy in Greg himself. It wasn’t as pronounced, but it was there all the same. Perhaps it grew with age.
That meant that I was in a room full of old–perhaps very old–vampires.

God. I was in big trouble.

Margo Bond Collins is the author of a number of novels, including Waking Up Dead, Fairy, Texas, and Legally Undead. She lives in Texas with her husband, their daughter, and several spoiled pets. She teaches college-level English courses online, though writing fiction is her first love. She enjoys reading urban fantasy and paranormal fiction of any genre and spends most of her free time daydreaming about vampires, ghosts, zombies, werewolves, and other monsters.

Be sure to add Legally Undead to your Goodreads bookshelves: https://www.goodreads.com/book/show/18366353-legally-undead 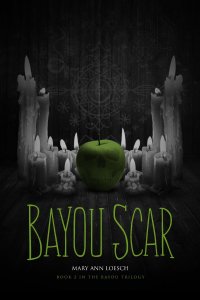 The moment teenage voodoo queen Joan Renault holds the Golden Apple of Journalism in her hand, its deadly power silently infiltrates her life. But this apple is more than just a token of high school pageantry.

And it just might kill all the people Joan loves.

Mary Ann Loesch is the author of numerous adult/YA fiction books including Nephilim, Even This Shall Pass, and the Bayou Myth series. An elementary theatre teacher, she has also published numerous educational books for the theatre arts classroom. She lives in Austin, Texas with her husband, daughter, and two dogs. Learn more about her at http://www.maryannloesch.com.