The Angelmen Series chronicles, the discovery of four leaders of the long forgotten race of the Nephilim who have just been identified by the enemy. Satan wants to activate his army of old to boost his chances in the final battle against all that is God. God is determined to rescue his people, who, although originally propagated by the meeting of demons and women, became more human than angelic other than a few latent powers activated in the presence of one another. God will not save them without the obedience of a sacrifice. Will the leaders work together to save their race from Satan’s regime? Who will be the sacrifice? 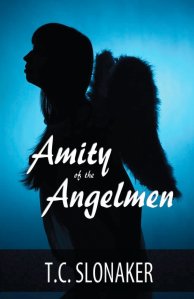 Excerpt from Amity of the Angelmen

“The man turned his attention from the worried teacher. “Now, Amity, why are you here? Are you just going to confirm the story?”

She tried to speak, but her voice had dried up.

Mrs. Jones was quick to jump in. “Amity got a good look at the man. I thought if she were able to describe him for you, you could have security look around for him.”

“We don’t have security staff here, Mrs. Jones.” His answer raised the concern of both females in the room, so he quickly added, “But perhaps that falls in the job description of the vice principal. I’ll have Mr. Harris come in to listen to Amity’s description and search the grounds for us. Would that be suitable?”

Both Mrs. Jones and Amity let out a deep breath, the teacher’s a little more relieved than the student’s. Amity somehow knew the man wouldn’t be found.

Amity was waiting…and waiting. And getting nervous. She was good at doing both those things, as often as she did them. She was almost always punctual to a fault. As soon as the final bell rang, she picked up what she needed from her locker and hurried to meet Mallory and any of her other friends at the front doors.

Mallory wasn’t punctual, to her fault, which drove Amity crazy, but she reminded herself it wasn’t the worst quality a best friend could have. Mallory had to put up with plenty in Amity, she was sure. Amity’s nerves only increased as she watched the number of students in the hall decrease, making her more visible to any stranger who might be seeking her. And Mallory was nowhere to be seen.

She didn’t like the idea of walking home alone; she rarely did it. Another great thing about Mallory was she lived only a block away from Amity, so the two almost always walked together. Amity guessed she shouldn’t have asked her to round up some others to join them. Who knew where that took her so-easily-distracted friend?”

Excerpt from Asher of the Angelmen

“ Remarkably shaken from the event that just transpired in the locker room, Asher could hardly stop trembling as he exited the gym area. More distracted than he had ever been, he jumped when he heard a voice.

“Must have been a really good workout,” she said, somewhat shyly.

The voice belonged to the pretty little sophomore from the girls’ cross-country team. Asher was enamored with her, and she seemed to be the one girl in the whole world to whom he had trouble working up the courage to actually speak. Normally, he even blushed at the sight of her, but he was already flushed. He enjoyed watching her run when he was between his own runs and plays during practice. She was a distance runner, which Asher admired.

This was the first time she had ever spoken to him.

She laughed, but it was a kind laugh. “I’m sorry. I didn’t mean to scare you. I just saw that you were still shaking and thought you must have had a really good workout.”

“Oh. Yeah.” Wow, really? He couldn’t come up with anything better to say? Brother.

“I’m Jessica.” She transferred all her belongings to one hand and stuck out the other for him to shake.

“I’m Asher.” He clumsily shook her hand, not transferring any of his things.

She laughed again. “No kidding! Of course I know who you are.”

That made Asher smile. He had almost forgotten his fame around school.

A car quickly pulled up outside the building and beeped once. Jessica seemed to know the cue. “Okay, well, I gotta go. Maybe I’ll see you around.”

She hurried off. Before she got in the car, however, she mouthed strange words to Asher, and he could only seem to translate them as, “Protect the Cause.”

“Yeah,” he said with a wave that she didn’t see. That was a weird thing to say, he thought. He wasn’t a great lip-reader, so maybe he just got it wrong.

About the Author ~ TC Slonaker

After finishing a career as a teacher to stay at home raising children, T.C. Slonaker found herself with many hours of to fill with thoughts and books. She began filling those hours by running outside on the trail with books on her iPod. After completing the Chronicles of Narnia books, she was determined to also give light to God’s story through allegorical writing about curious creatures. The idea came to her to start a series about the Nephilim to show a story of God’s redemption.

2 comments on “Spotlight On: The Angelmen Series by TC Slonaker”