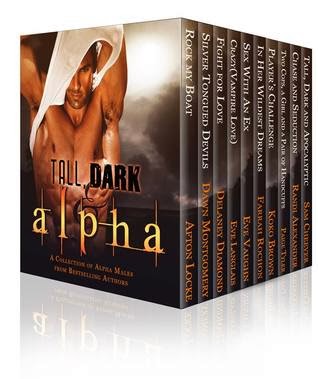 He makes your heart pound and melts your resistance away. He promises you a world of passion and you find it impossible to resist his dark charm. When he catches your eye across the room, you know he means business. He could be an executive, cop, shape shifter, or a bad boy looking for a little fun. Once he has you in his sights, you can’t get away—and after one sizzling night in his arms, you won’t want to. He’s Tall, Dark & Alpha. The alpha male is the ultimate indulgence…the richest dark chocolate…and we’re offering him to you in abundance.


(Please note that some excerpts may contain adult material)

Dawn loves to write almost as
much as she loves to read. She has traveled the world twice over. While her
days were filled with long hours and hard work, her nights were left for dark,
lustful fantasies in and out of strange hotels and cities.

Alaska and Texas are the
places she calls home. She recently moved from the frigid North to Texas with
her family and neurotic dog. It was tragic to leave behind the moose and bear
for wide open plains and sexy cowboys.

Delaney Diamond writes sweet
and sensual romance novels and is the site manager of Romance Novels in Color,
where diversity in romance is celebrated. Originally from the U.S. Virgin
Islands, she now lives in Atlanta, Georgia. In her spare time she reads romance
novels, mysteries, thrillers, and a fair amount of non-fiction. When she’s not
reading or writing she’s trying out new recipes or traveling to an interesting
locale. Find free reads and the first chapter of all her books at
http://www.delaneydiamond.com.

Hello, my name is Eve, a
Canadian mom who works full time as an author. In between juggling my three
kids, hubby, and housework, I pen steamy romance–usually with shifters,
cyborgs or aliens lol. I love to write, and while I don’t always know what my
mind is going to come up with next, I can promise it will be fun, probably
humorous and most of all romantic, because I love a HEA.

If you’d like to know more,
read some excerpts or find out what’s coming next, then please visit me at
http://www.EveLanglais.com
Or sign up for my new release
email list at
http://www.evelanglais.com/newrelease

Eve has always enjoyed
creating characters and stories from an early age. As a child she was always
getting into mischief, so when she lost her television privileges (which was
often), writing served as her outlet. Her stories have gotten quite a bit
spicier since then! When she’s not writing or spending time with her family,
Eve is reading, baking, traveling or kicking butt in 80’s trivia. She lives in
the Philadelphia area where the love is brotherly and the cheese steaks are
plenty.

Farrah Rochon, award-winning
author of the popular Holmes Brothers series, hails from a small town just west
of New Orleans. She has garnered much acclaim for her New York Sabers football
series for Harlequin’s Kimani Romance imprint. She has been nominated for the
prestigious RITA Award from Romance Writers of America and an RT BOOKReviews
Reviewer’s Choice Award. She spends way too much money on chocolate and
Broadway shows.

PAIGE TYLER is a USA TODAY
bestselling author of sexy, romantic fiction. She and her very own military
hero (also known as her husband) live on the beautiful Florida coast with their
adorable fur baby (also known as their dog). Paige graduated with a degree in
education, but decided to pursue her passion and write books about hunky alpha
males and the kick-butt heroines who fall in love with them. Find her books at
Ellora’s Cave, Blushing Books, and Sourcebooks. She is represented by Bob
Mecoy.

Published with Cleis Press,
Wild Rose Press, and self-published, Randi writes smokin’ hot romance with
heroes who’ll have you begging to ride off into the sunset with them. When
she’s not dreaming of, or writing about, rugged cowboys, Randi is biking trails
along remote rivers, snorkeling the Gulf of Mexico, or practicing her drumming
in hopes of someday forming a tropical rock-band.

Saddle up! And prepare
yourself for the sexier side of happily ever after.

Randi Alexander loves to
connect with her readers! Say “Howdy” at
https://twitter.com/Randi_Alexander, sign up for her newsletter at http://RandiAlexander.com/, and fall head over spurs for her cowboys at https://www.facebook.com/RandiAlexanderBooks

An award-winning author of
50+ books of romantic suspense and fantasy/paranormal, Sam’s books have won the
Dream Realm Award for fantasy and The Swirl (interracial romance) Award; have
been nominated and/or won several CAPAs; were nominated for “Best of” with LRC
and The Romance Reviews; and have won eCataromance’s Reviewer’s Choice award.
She’s published with Ellora’s Cave, both Romantica and Blush; Changeling Press;
and Musa Publishing. Sam also publishes as Declan Sands, writing m/m fiction,
and under her own imprint, Electric Prose Publications.