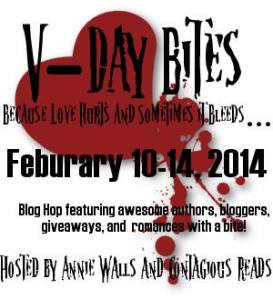 Welcome to my stop in the Ghosts section of the V-Day Blog Hop. As I noted in my stops on the vampires and zombies days, I am particularly delighted by this hop because I’m pretty sure that Valentine’s Day brings out the monster in everyone, at some point.

The article below is one that I’ve posted before on why I love writing about a ghost; it comes down to the ways that our monsters reflect us, I think.

So check out the post below, enter to win a slew of prizes, then HOP to the rest of the blogs!

But before you go, tell me: what do you love best about ghosts? 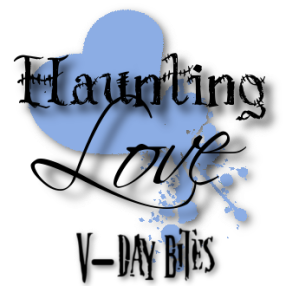 Why I Love Writing about a Ghost

When I was working on Waking Up Dead, someone asked me why I would want to limit my protagonist by making her a ghost, unable to easily interact with the world around her.

I didn’t have a good answer then, but I’ve thought about it a lot since.

And here’s the deal: I love writing about Callie and her limitations. Because ultimately, that’s what many books are about, right? The limitations we face when interacting with the world around us. Callie’s limitations are just more immediate and obvious. She has to really work to have an impact on the world, and that’s something we can all sympathize with. Who hasn’t had days when getting anything done felt like swimming through peanut butter? When, try as we might, we can’t seem to communicate with the people surrounding us. When our attempts to move people or things fall flat and we have to start working on new ways to try to be seen and heard.

For Callie, these obstacles are instantly recognizable, but her attempts to make connections echo the attempts in our own lives. So why would I want to limit my protagonist by making her a ghost? Because sometimes, we’re all ghosts. But if we keep at it, we can overcome that little problem.

Keep reading for the scene from Waking Up Dead when Callie finally finds someone who does see her.

“I know you’re not talking to me,” she said. She stared straight ahead and pushed her cart down the middle of the aisle toward housewares.

“I am talking to you. Look. I know this is really weird, but I need your help.”

“Well, I’m not talking to you. I don’t know what your problem is, but you can take it somewhere else.”

I wanted to reach out and grab her cart, to make her stop and talk to me, but of course I couldn’t. Which gave me an idea.

I scurried out in front of her, planting myself in her path.

“Not until you hear me out. Please?”

She moved her cart to the left. I stepped out to intercept her. She moved to the right. So did I.

“You got some kind of death wish or something?” she asked.

I laughed and shook my head. “If only you knew.”

“I’ve got no time for this,” she said. And she slammed into me with her shopping cart.

At least, that’s what she planned to do.

The shopping cart, however, slid right through me. When it stopped, the basket had sliced cleanly through my midsection. The bottom rack merged with my ankles. From my perspective, it looked like two perfectly solid objects–me and the shopping cart–had melted together. I don’t know what she saw.

Whatever it was, it wasn’t good.

The woman’s eyes widened, then rolled up into her head as she slumped to the ground in a dead faint.

I bent down to try to wake her up, but no matter how hard I concentrated on making contact, I couldn’t even touch her.

I hate being a ghost.

Margo Bond Collins lives in Texas with her husband, their daughter, several spoiled cats, and a ridiculous turtle. She teaches college-level English courses online, though writing fiction is her first love. She enjoys reading urban fantasy and paranormal fiction of any genre and spends most of her free time daydreaming about vampires, ghosts, zombies, werewolves, and other monsters. Waking Up Dead is her first published novel; Fairy, Texas is the second. Her next novel, Legally Undead, is an urban fantasy forthcoming in 2014 from World Weaver Press.

Laney Harris didn’t want to live there. When her mother remarried and moved them to a town where a date meant hanging out at the Sonic, Laney figured that “boring” would have a whole new meaning. A new stepsister who despised her and a high school where she was the only topic of gossip were bad enough. But when she met the school counselor (and his terminal bad breath), she grew suspicious. Especially since he had wings that only she could see. And then there were Josh and Mason, two gorgeous glimmering-eyed classmates whose interest in her might not be for the reasons she hoped. Not to mention that dead guy she nearly tripped over in gym class.