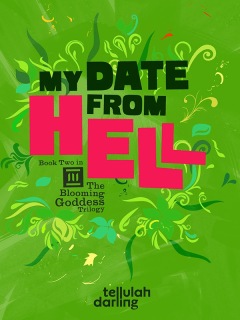 Title: My Date From Hell by Tellulah Darling

Sophie Bloom’s junior year has been a bit of a train wreck. After the world’s greatest kiss re-awakened Sophie’s true identity as Persephone (Goddess of Spring and Savior of Humanity), she fought her dragon-lady guidance counselor to the death, navigated mean girl Bethany’s bitchy troublemaking, and dealt with the betrayal of her backstabbing ex, Kai (sexy Prince of Darkness). You’d think a girl could catch a break.

With Zeus stepping things up, it’s vital that Sophie retrieve Persephone’s memories and discover the location of the ritual to stop Zeus and Hades. So when Aphrodite strikes a deal that can unlock Sophie’s pre-mortal past, what choice does the teen goddess have but to accept?

The mission: stop media mogul Hermes from turning Bethany into a global mega-celebrity. The catch? Aphrodite partners Sophie and Kai to work together … and treat this suicide mission as a date. Which could work out for Sophie’s plan to force Kai to admit his feelings for her–if she doesn’t kill him first.

Add to that the fact that BFF Theo’s love life and other BFF Hannah’s actual life are in Sophie’s hands, and suddenly being a teenager—even a godlike one—seems a bit like … well, hell. Whatever happened to dinner and a movie?

The YA romantic comedy/Greek mythology fireworks continue to fly in My Date From Hell. Love meets comedy with a whole lot of sass in book two of this teen fantasy romance series. Breaking up is easy; dating is deadly.

pointed her gun at me again, kind of casually. “Your problem is you’re too hung

up on the past. You gotta move forward with yer life.”

Hannah give a smothered laugh.

this cutie pie in love with ya, and instead of enjoying his company, all you do

is whine.” With a quick flick, Aphrodite opened the cylinder to reload.

at Kai. “Whattya talkin’ about? Sure he is. Everyone knows Kyrillos

I took a deep breath, folded my fingers over my palms and looked slightly to the

left of her in case I accidentally started blasting. Didn’t want to go down in history

as the girl who killed the Goddess of Love.

just desire,” I said with faked calm. “Kai is so resistant to the idea of being

in love with me that your arrows don’t work. Besides which, when he actually does

fall so hard for me that he doesn’t know which way is up, I want him to know he

chose that of his own free will. That he chose me.” I threw him a sweet smile.

Kai got this look of “have we had this conversation before?” on his face. My smile

scooped up a saclike pink purse laying on the ground. She rooted around in

it. “Desire is part of romantic love, silly,” she said to me.

before turning back to Kai. She gestured with the still-open chambered revolver

toward him. “Your body knows what’s what. Stop fighting it.”

it off, reloading. “And you,” Aphrodite said to me, as she plucked more bullets

from Festos’ hand to load into the chamber. “Yer just as bad with your own issues.”

know about my insecurities around Persephone could she? Aphrodite narrowed her eyes

shot me a look of disgust and popped the final bullets into the chambers. She gestured

at each of us in turn with one pink, sparkly manicured finger. “I’m gonna start

gettin’ real mad about how youse is all dealin’ with love.”

a whole bunch of drags around here where love is concerned,” Festos agreed.

so much for inviting him along,” Theo said to me.

an apology at Theo, then shot back at Festos, “Seems there’s a whole bunch of dogs

here, too.” I looked between him and Kai.

forget Pierce,” Festos replied cheerfully. “He’s a total mimbo.” “He is not,” Hannah

threw her a fond smile. “I like you, girlie.” “Love in name, hormones in game,”

Theo countered. “Look at us all in agreement,” Festos replied.

you’re talking about lust,” I protested.

pretty good too,” Aphrodite said, “but it ain’t nothin’ like the real thing.” She

clicked the cylinder into place and looked at me. “We got a deal? You’ll get Jack

to kill the campaign?”

undo the love thing?” I asked.

could do with a little love in your life. Kyrillos is obviously brimming with love

for ya now,” she ignored Kai’s snort, “so you’re gonna enjoy it.”

Kai piped up. “I’d say I’m ready now.” He arched an eyebrow as if to say “ball’s

it’s a great idea,” I slid my arm around his waist and pressed myself up against

surprise flashed across his face. “Perfect.”

outdate him any place, any time. I brightened. This was going to be fun. The touching

part wasn’t a downside either.

of the world does dee-pend on you loving each other,” Aphrodite said. “So, good.

We’ll start with a date.”

it’s a euphemism,” Festos burst out. “And Kai doesn’t date.”

his arm around my waist before pressing his fingertips into my hip. “Never wanted

to before. Sophie’s the exception.”

exception?” Festos asked. “Shut up,” Kai and I fired at him in tandem.

it in stride, waggling his eyebrows cheerfully at Theo who pretended to look disapproving

but totally wasn’t. Even Hannah didn’t bother to hide her smile.

is,” I told Aphrodite, “I have to be back at school by Sunday morning. I have a

meeting I can’t miss. So I’ll have to get this thing with Jack done quickly to have

time for the date.”

to find Hermes is the date.” Aphrodite looked at me like I was an idiot.

“You two need as much together time as possible.”

I needed all my wits about me to handle Kai. Something that couldn’t happen if I

had to track down Hermes at the same time. I tried a new tactic. “A date involves

dinner and a movie. Something romantic. Finding Hermes hardly counts.”

me in her gaze. “Had so miny of them, Miz Expert? All a date is, is two people spendin’

time to deepen their attraction.”

it,” Hannah piped up.

scrunched up her nose. “Huh?”

far more first dates than second,” Hannah explained. “Which means that after spending

time, those people realized they were not a match.”

narrowed her eyes at Hannah. “I don’t get ya. You talk like that but you’re so brim

threw her hands up. “Enough’a this nonsense. You’ll go together to find Hermes.

And you’ll be date-like doin’ it.”

like you planned it that way,” I said to Kai.

grew wider as he gave my waist a squeeze. “Told you I get what I want. Feel

free to let that sink in.”

1. YA romantic comedy author because her first kiss sucked and she’s compensating.

Geeks out over: cool tech.